Back / العودة
You are here: You are here: » News » The Ministry of Culture Remembers the Late Jassim Al-Zayni

The Ministry of Culture Remembers the Late Jassim Al-Zayni 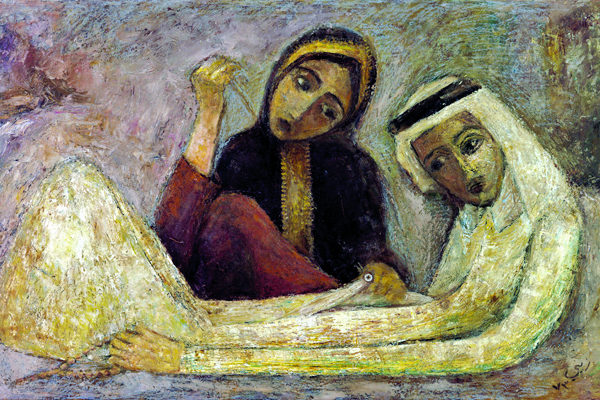 The Theater Affairs Center retweeted a post by the Ministry of Culture remembering the late painter Jassim Al-Zayni. The retweet comes in an effort by the Center to take part in celebrating Qatari artists and remembering those who passed away but left their mark on our world. The Ministry of Culture regularly publishes posts that feature Qatari leaders in the fields of arts and culture. These posts have been welcomed by many artists and art enthusiasts who appreciate the remembrance of Qatari innovative minds.

The post about the late Jassim Al-Zayni, who was the pioneer of contemporary Qatari visual arts, sheds light on some of his achievements. Al-Zayni was born in Doha in 1943, and his artistic career started in 1967. He studied at the Fine Arts Academy in Iraq, and later became the first elected president of the Qatar Fine Arts Association. He also served as the director of the Museums Authority at the Ministry of Culture. Al-Zayni’s paintings focus on the historical transformation of Qatar’s society after the discovery of oil. He participated in all the galleries organized by the Qatar Fine Arts Association and numerous Arab and international galleries and biennales between 1974 and 2006, when he had his last gallery show The Pearling Chief before he passed away in 2012.

Jassim Al-Zayni is most famous for his 1972 painting Qatari Features, which was classified as one of the most distinguished Arab works of art. The painting depicts a young girl wearing a traditional Qatari bukhnuq headdress sewing buttons on a thobe worn by her brother who is donning a traditional Qatari ghutra and Uqal. This painting, which was the topic of endless debates among Arab and western art critics, was often described as a masterpiece.

The Ministry of Culture has recently celebrated the late artist Abdul Aziz Jassim by posting a video of his work on its social media pages. The video was widely watched and shared, especially by the late Jassim’s friends and fans.