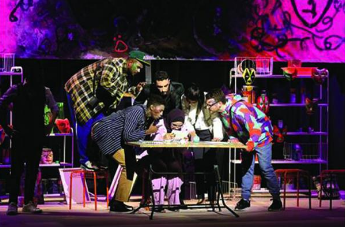 The Theater Affairs Center will hold the second edition of the University Theater Festival on the 20th of March at the North Atlantic College theater, with the participation of a number of theatrical university groups in Qatar. The Festival will continue until the 27th of March, so that the closing ceremony of the festival coincides with International Theater Day, which makes it a special celebration for this day.

This was announced by artist, Salah Al Mulla, Director of the Center for Theater Affairs, in his statement to the Qatar News Agency (QNA) on the sidelines of the closing ceremony of the acting and directing workshop that was held this evening at Qatar National Theater. He noted that the Center held a workshop for two weeks in preparation for the Festival. This workshop was organized for university students, who will participate in the second edition of the Festival, and it included training students in both the theoretical and practical aspects of theater, as they got acquainted with basic rules of theater work, various theatrical skills, such as how to move on stage, the art of diction, voice and articulation, which are essential skills for whoever wants to enter the world of the theater. This workshop would be a great help for them during next festival. He also praised results of the workshop that appeared clearly during the closing show, which included presenting scenes from world stage.

Director of the Center for Theater Affairs added that the Center is currently organizing another workshop in the art of theater writing as a basic support for the University Theater Festival. He expressed his hope that the scripts presented in the workshop would be turned into theater works someday, whether in this Festival or elsewhere. He also noted the Center’s role in preparing young people to master all elements of theater work, including acting, writing and directing, stressing that the different organizational aspects of the Festival will be taken care of by young people, who will also participate in the accompanying practice seminars along with a number of theatrical movement icons who that support young theater artists.

Regarding approval of scripts participating in the Festival, Mr. Al Mulla said that we currently have six read scripts which have been referred to competent committees for approvals. Then the Evaluation Committee will select the scripts that will compete in the Festival. He praised the financial and logistical support provided by the Center for Theater Affairs for University Theater, and similarly appreciated the role of the North Atlantic College.

In response to a question by the QNA about preparations of the Center for Theater Affairs to launch the new theatrical season, Mr. Al Mulla explained that names of the Evaluation Committee of the new theatrical season have been approved and we will meet in the next few days to read the scripts submitted for this season to come out with the Committee’s decisions. Then theater reservations for the groups, with works participating in the Festival, will be approved. He also noted that this new season will have only six competing works; three plays for adult theater and another three for children’s theater, in order to grant it a bigger opportunity for being shown during the theater season.