A review of the journey of the novelist Shamma Al-Kuwari 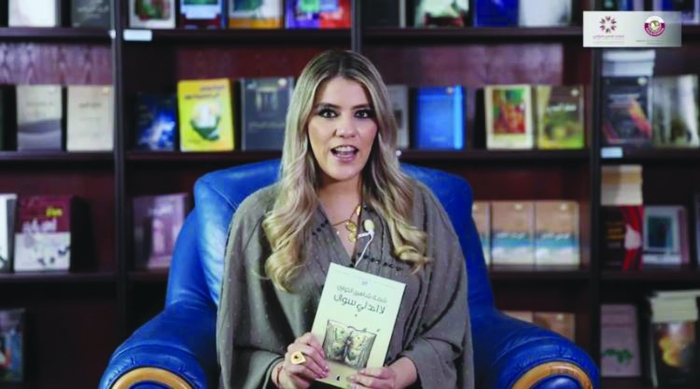 As part of a new episode of the “Get to know a Qatari writer with Maria” initiative, presented by social media activist Maria Fernanda del Rio, the Qatari Forum for Authors sheds light on the career of writer Shamma Shaheen Saleh Al-Kuwari, a Qatari novelist who was born and raised in Doha and graduated from Qatar University and received her Master’s degree from Hamad Bin Khalifa University.

Maria reviewed the most important professional and literary writer’s stations and confirmed that she worked in the Ministry of Awqaf and Islamic Affairs. She is an active media and social worker in women’s activities. She has also won numerous local awards in literature and culture, participated in numerous seminars and cultural events, and has contributed to social work and women’s activities in Qatar.

She also had a steady column in the Qatari newspaper, Al-Sharq, entitled Hadith Al-Qalam “the speech of a pen”, and she wrote in Al-Raya newspaper, and Al-Arab newspaper, prepared the Literature Garden and Small Talents page in the Lady of the East magazine.

Maria said that the Qatari novelist has a large collection of books,” We Sow Love”, a social story collection, published in 1995 and “The Strong Child”, a children’s story series published in the Kuwaiti Al-Noor magazine in the same year, and “Sunset Fountains”, which won third place in Vodafone’s first literary competition in 2014, in addition to “Hadith Al-Qalam” “the speech of a pen”, which is a collection of various articles and the “banner of Al-Nurhan”. “The Garden of Jasmine Flowers”, published in 2005, and the novel” Hatoon”. “Noor Al-Oyoun”, 2014 and “Shaheen”. “The Blue Stone Galaxy” in 2014, is considered to be the first novel specialized in science fiction literature for young people in Qatar. She wrote a radio play entitled “The Harvest” in the summer of 2012 for Qatar Radio, and her short story collection “One Flower and Five” won third place in the second Vodafone Literary Competition in 2015. In 2015, she released two novels, “The Eye Sees What It Loves”, and “I Meet You Twenty Years Later”, and in 2017 two other novels: “I have no one but you’, “shadow and light”.

Ms. Shamma has won many awards, including a medal and a certificate of appreciation for winning the Rashid bin Humaid Prize for Culture and Science in the field of short story twice, in 1999 and 1995, and the Ideal Woman Award in the Literary Field from the Qatar Youth Hostels Association for the year 1996, in addition to the Dean’s Award from the College of Islamic Studies Hamad Bin Khalifa University for its scientific excellence and the State Prize for Children’s Literature for the sixth session of 2014 for Shaheen’s novel. ” The Blue Stone Galaxy” and the State Prize for Children’s Literature in its sixth session for the 2014 novel branch of “Shaheen’s novel.”. “The Blue Stone Galaxy”, shared with Yaqoub al-Sharouni for his work The Ships of Prohibited Things.