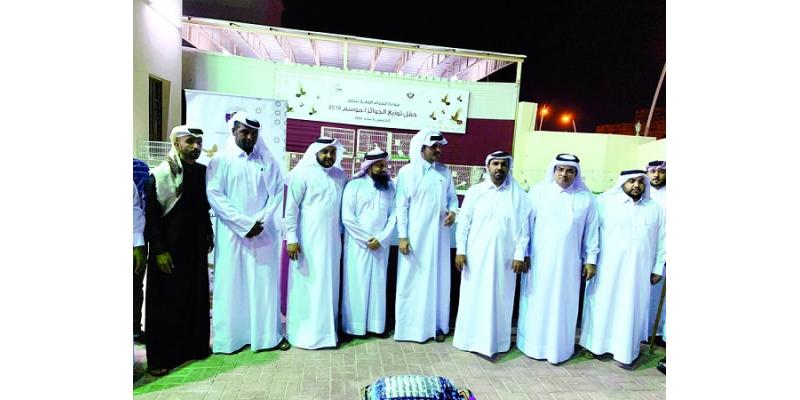 The “Youth Centre for Hobbies” of the Ministry of Culture and Sports concluded the “2019” season by honouring 44 winners in the “Tippler Pigeons” race during a closing ceremony held on Thursday. Dr. Essa Al-Hur, Director of the Centre, honoured the winners, participants, referees, organizers and everyone who contributed to the success of the tippler pigeon races throughout 2019. This is the first ceremony tippler pigeons amateur at the “Youth Centre for Hobbies” building. The race was held on October 11 and 18. The prizes for the first positions were as follows: first position, the cup and two thousand riyals; second position, the cup and 1500 riyals; third position, the cup and one thousand riyals; the fourth and fifth positions, 500 riyals each and the first and last bird and the bird carrying (leg bands), the cup and 500 riyals each. Moreover, the cups and acknowledgement certificates were handed out to participants.
For his part, Mr. Meshaal Saud Al-Kuwari, Chairman of the Organizing Committee for the race, said that the 2019 season was successful, and that the new year will witness the organization of the two most important tournaments held for the first time, namely the National Day Cup and Sports Day 2020 in order to ensure celebration and participation in national events. Al-Kuwari said that the level of participation in the 2019 season was distinguished in terms of enthusiasm for participation and results. A committee headed by him supervised the organization of the race including: Ali Al-Mannai, Law and Arbitration Officer, Nayef Al-Sada and Mansour Al Nuaimi, members of the committee. The committee succeeded in organizing and providing a referee for each owner (cage) monitoring the flight of the tippler pigeon at six in the morning and recording hours. Each amateur participated with seven tippler pigeons. Al-Kuwari stressed that the distinguished participation of amateurs helps in developing the hobby and attracting young people who expressed the desire to join the centre. He considered the celebration of the end of the season and honouring as an evidence of the interest of officials in the centre and the Ministry of Culture and Sports in hobbies and providing an appropriate environment for practicing them and discovering and developing talents and preparing a generation of youth characterized by awareness and patriotism. Al-Kuwari expressed his readiness to help new hobbyists to acquire the best breeds of tippler pigeons, especially Pakistani ones.
For his part, Mr. Ali Al-Mannai said that the season was successful, and participants showed keenness to participate and compete with the best breeds of tippler pigeons. A number of referees were monitoring the results, and recording the number of hours. He said that he was able to break the number recorded since 1999, and won first place with 133 hours while Musa Al-Balushi won second place in 114 hours and Hussain came in third place with 106 hours. He pointed out that the tippler pigeons whenever they flew to the top to the zero point, and the longer they take to land, the more chance they have of winning the advanced position. Al-Mannai praised the results achieved by amateurs during the season, and that officials of the Centre were keen on organizing races, developing and spreading the hobby, attracting new amateurs, enhancing the values of cooperation, creativity and sincerity in a creative environment that encourages competition, and preparing all avenues for members to practice.
In the same context, a number of tippler pigeon enthusiasts expressed appreciation for the efforts of officials at the Centre to develop the hobby and organize races and considered their being honoured as an encouragement for them, which helps in spreading the hobby and competition among amateurs. It is worth noting that the “Youth Centre for Hobbies” is keen on organizing local competitions, organizing amateur courses in the field of breeding carrier and tippler pigeons and how to care for them, as well as participating in competitions, to introduce the breeds and development of the hobby in the State of Qatar.