Back / العودة
You are here: You are here: » News » WE SEEK TO PRESENT AN EXCEPTIONAL MODEL OF CULTURAL RELATIONS BETWEEN JORDAN AND QATAR 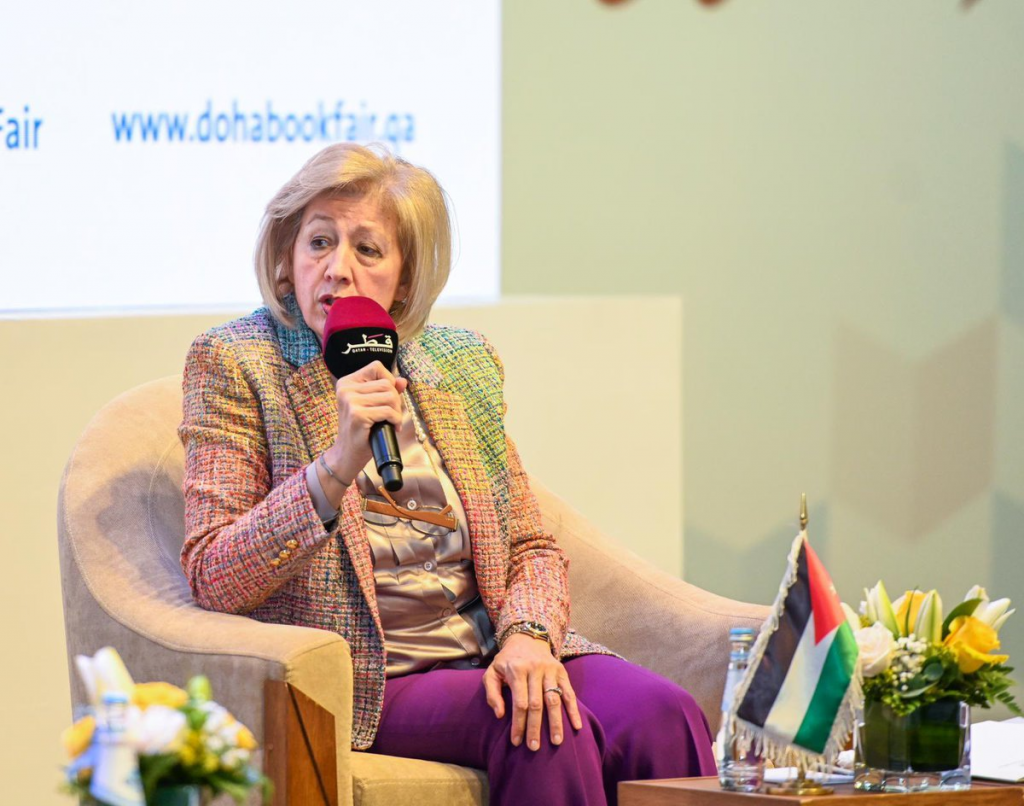 Her Excellency Ms. Haifa Al-Najjar, Minister of Culture in the Hashemite Kingdom of Jordan, affirmed that cultural cooperation between the State of Qatar and Jordan enhances the political and cultural partnerships of the two countries, and enables them to present an exceptional model in bilateral relations, especially cultural relations, on more than one level, and it also positions them at the forefront of influential Arab and international cultural action.

Her Excellency said: “There exists a special relationship between our two countries, which have many similarities, chief among which is their stable position at the national level with regards to major Arab issues or the relationship between the state and citizens, and the interconnectedness of the leader and the subjects in both countries, in addition to the similarity in the geopolitical relationship, the solidity of the two countries, and their perception of the national Arab project and Arab-Islamic civilization, on which the solid stances of both countries are based, as well as their belief in pluralism and its implications for culture.”

The Jordanian minister underscored the importance of strengthening cultural partnership between the two countries, expressing appreciation for the outcomes of her visit and her meeting with H.E. Minister of Culture, Sheikh Abdul Rahman bin Hamad Al-Thani, pointing out that the outcomes of this meeting will be put into practice through common cultural programs, mainly the participation of the Qatari Ministry of Culture at the cultural week within the activities of Irbid Capital of Arab Culture, which will be held this year. An invitation was also extended to H.E. Minister of Culture to attend the inauguration ceremony, stressing that what matters more than agreeing on a set of events is the existence of a sustainable cultural relationship between the two countries to enhance cultural exchange whereby Jordanians can present their culture extensively in Doha, on the one hand, and Qataris introduce theirs in Amman, where Qatar has an impressive structure.

Her Excellency said: “We will strive to present concerts at the Cultural Village Foundation (Katara) and theater performances at the Qatar National Theater, and work will be carried out within a clear timeline in this field,” adding: “We want the culture of the State of Qatar to be represented at Irbid Capital of Arab Culture 2022, because Irbid has cultural components related to the goals of Qatari culture.”

She further stressed the endeavor to build relationships and effective partnerships with Doha at the level of translation and publishing in various fields, especially in children’s, and meet the relevant requirements in terms of scientific, literary, and creative culture, in addition to providing libraries in Amman and Doha with various intellectual productions.

Regarding her assessment of Qatar’s achievements at the level of cultural movement and cultural structure, following visits to a number of cultural institutions in Doha, the Minister said: “I am happy with what I have observed in terms of cultural achievements in Qatar. At the level of cultural movement, it became evident for me that Qatar possesses an exceptional vision full of consciousness, keenness, and ability to predict the future, as it provides a wonderful model in adhering to our Arab and Islamic customs and traditions,” noting that this cultural movement clearly shows the national identity project in Qatar, in a way that enhances the Qatari citizen’s national identity, pride, and dignity.”

Ms. Al-Najjar explained that her keen interest and participation in the Doha International Book Fair with a lecture on the prospects for Arab cultural cooperation confirms that the book fair is an exceptional model in terms of organization and in terms of the quantity and quality of the books on display, noting that Jordan was a partner in this cultural celebration through the presence of thirty-six Jordanian publishing houses, which displayed important publications.

She commended the interest of the Qatari Ministry of Culture and H.E. the Minister of Culture in the International Book Fair in such a comprehensive way, pointing out that the exhibition was not only meant for selling books, but rather for providing philosophical, intellectual, scientific, and documentary books, as well as other types that enlighten the reader, indicating the existence of integration and complementarity between the elements of culture at the Book Fair, as exemplified by photography and plastic art, as well as music and various intellectual activities that helped increase the cultural momentum.

Her Excellency added that the cultural structure in Qatar shows the State’s interest in culture and the link between tourism and culture at the same time. The Cultural Village Foundation (Katara) is a model for the cultural and tourist village that includes all areas of creativity and everything related to cultural manifestations of art and music. So, there is a wonderful cultural infrastructure of theaters, studios, and creative industries, design, and filmmaking, as well as stunning tourism. Qatar Museums also has its own distinctiveness. The Minister said: “I have visited many world museums but my visit to Qatar Museums gave me the story of Qatar. The museum stems from the spirit of Qatar, and with all its educational and cultural activities, it has gone beyond the traditional form of museum display. In it, the visitor sees the story of Qatar, which reveals a great deal of steadfastness, patience, sustainability, persistence, courage, and many stories of creativity and inspiration. The museum is a beautiful blend of museum action and the use of technology worthy of appreciation and admiration.”

On the extent of the impact Doha Capital of Culture in the Islamic World 2021, whose closing ceremony and the participation of Jordan in many of its events, which Her Excellency witnessed, she said: “Jordan has great love for the Arab nation and a sense of belonging to it; just as Jordanians love Gulf countries and Qatar, they also believe in the Qatari experience, and Jordanians will remain part of this cultural act. Qatar takes the Gulf as a springboard to unleash its creativity,” which makes one wonder if no Jordanian interaction could come out of this great cultural and creative movement. She stressed that Jordanian creative artists are active contributors to this cultural movement.

Regarding the investment of these great cultural events, such as Doha Capital of Islamic Culture, or Irbid Capital of Arab Culture, and their importance in achieving the aspirations of citizens in both countries, Her Excellency said: “Everything we do during these events comes within the framework of the care for the citizen, and I saw in the events held in Qatar how the citizen was an active partner in them and how the Qatari Ministry of Culture works closely with the citizen. In Jordan, we do not work apart from the citizen either, and everything we offer stems from the principles of good citizenship. We work to build trust and bridge roots between state institutions, their foundations, and the people, as well as to achieve social security, which requires practical activation of productive culture to achieve prosperity and development in their comprehensive meaning. Furthermore, we strive to make of culture the main gateway for the required transformations at various levels and for our culture to be present in the world.”

Concerning the readiness of the Jordanian Ministry of Culture to launch “Irbid Capital of Arab Culture this year, she said: “We are working earnestly and we supplicate God’s help for success to present the capital of Arab culture in an unconventional way, because Irbid represents the north of Jordan and all its related cultural elements,” noting that during the first  two weeks of next February, the final plan of the programs for the celebration of Irbid Capital of Arab Culture will be ready, and it will include cultural weeks for various Arab countries, including the State of Qatar, in addition to different cultural, artistic, and creative activities. She stressed that despite the limited budget, “we are able to present a grand celebration that reflects the specificity of culture in Irbid and the north of Jordan in general, because it is a city closer to the desert; so, we must express this culture. We will talk about the Hauran Plain and Nabataean poetry, especially that this region is rich in creative artists, writers, and musicians.” She indicated that the celebration will encompass all the culture of Jordan, its components, and regions, meanwhile conveying the Arab culture to Irbid.

On the most important characteristic of cultural identity in Jordan, Her Excellency said: “Our cultural project is continuous and steadfast, and our pride in the Arab and Islamic civilization is ingrained in us, which we will reflect in this celebration,” emphasizing that the Jordanian cultural identity stems from the Jordanian national values of love for the homeland, pride in its ancient and modern history, loyalty to the country’s leadership, and moderation in the adoption of Arab issues, as well as belief in the Jordanian policy regarding our national constants; that is to say, the Jordanian citizen should enjoy social peace, health, educational security, honor, and dignity, and that Jordan will not abandon its constants, especially with regards to Palestine and its legitimate cause, as well as the issue of administration of Palestinian holy sites.

In response to a question about the premises for achieving Arab cultural integration, Ms. Al-Najjar said: “Arabs share many commonalities: historical, religious, civilizational, linguistic, etc. I, however, believe that the basis of this integration lies in language and its preservation, as it is an important factor for intellectual and affective rapprochement, and for cultural and civilizational rapprochement. We can, therefore, build on these commonalities to achieve many Arab programs that enhance our common values, preserve our cultural heritage, and at the same time reinforce creativity, production, and cultural sustainability.” She stressed the role of the ministries of culture and education in the Arab world in achieving this cultural integration.