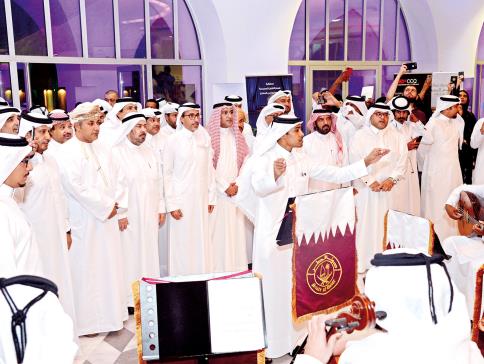 Al-Raya learned that the Theatre Affairs Centre is preparing to launch the theatre season awards ceremony 2019 next Saturday, January 11th, in the Drama Theatre in Katara. Winners will be announced in all theatrical areas and the recommendations of the jury will be presented, along with a review of the details of the last season and the most important matters accomplished during that period. The Qatari theatre journey throughout the season will be summarized through a short theatrical sketch. Furthermore, racing to win prizes this season are 9 theatrical works, with 44 awards that will be presented to the creators of the theatre in all fields. Honouring also includes a number of prominent contributions in the field of theatre during the season, knowing that the celebrated season witnessed the presentation of 13 theatrical works since the last ceremony that took place to distribute last season’s prizes. The plays are: “Dignity of a Homeland”, “Jameel after Amendment”, “Extras”,”The Cakes Seller”, “I love to fly”, “Sweet Homeland”, “The Play”, “Knights of the Homeland”, “Kharbatation“, “Belqis, Peace Bird”, “Pearl Tree”, “The Tree Barber”, “Villa 24”.

According to statistics carried out by the Centre for Theatre Affairs, the theatrical works that were presented have reached 13 performances on the Qatar National Theatre during this season compared to only 8 performances last year. Moreover, in this season, the works included this season were attended by over 32 thousand spectators throughout the period of the shows. Over the course of the season, the texts reading committee received 23 theatrical works. 14 works were accepted, including 9 for adults and 5 for children. Over the course of the entire season, 13 directors competed with the participation of 11 authors, 124 talents were reviewed compared to last year, which saw only 81 actors. It is worth nothing that the thirteen plays that were shown along with other forms of theatre that were represented in the universities theatre, school theatre and various puppet theatre shows, as well as being present in many occasions and events. Furthermore, many country shows participated in several international festivals and won many awards during this season.