Back / العودة
You are here: You are here: » News » The return of the festival restored the spirit of the theatrical movement 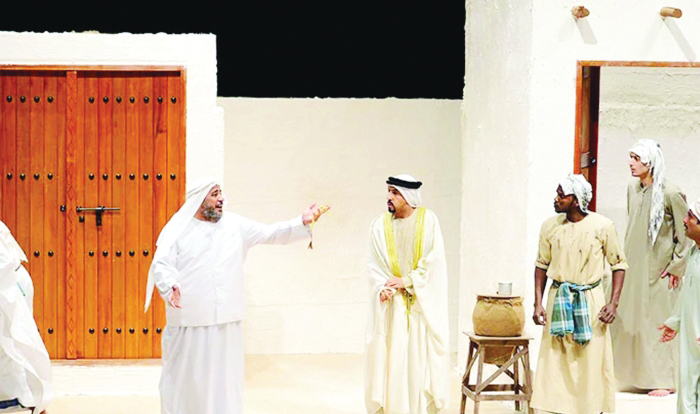 Qatar’s art community was overwhelmed with relief, happiness and optimism after the Doha Theater Festival was announced to be back after years of absence. How many people in the theatrical movement demanded the return of this event, which has always reunited, embraced and embraced them, under the same banner of love, luster, magic and irresistible appeal?

The festival has returned with hope for all the theater actors in Qatar. It has returned to light the way and pave the way again for the actors who love the theater, as well as young talent who still dream of expressing themselves in a theatrical way by standing before the audience and on the stage.

The decision to re-continue the Doha Theater Festival was met with more praise and appreciation, as Qatar’s artists praised this decision and this initiative. They expressed their thanks and appreciation to HE the Minister of Culture Sheik Abdulrahman bin Hamad Al-Thani for this decision, which they confirmed is a decision to correct the course for the theatrical movement because of its great importance to them.

The Center for Theater Affairs, led by Mr. Abdul Rahim Al-Siddiqi, the center’s director, and his diligent and diligent work team have a major role in reviving this festival and making it a comeback again, through sound planning and great efforts. Through these efforts, the center strives to achieve the best possible result from this festival, which comes back after five full years. There are multiple efforts by everyone inside the center to enhance the role of art and artists in Qatar, as was confirmed by Al-Siddiqi in the press conference where he announced the return of the festival.

On this decision and its implications for the Qatari theater movement, artist Salem Al Mansouri said: The news about the return of the festival is the news of the return of the theatrical movement to life once again. This is a good gesture to which we thank, HE the Minister of Culture, and wish the event to continue, as it is of great importance to everyone working in this field.

He pointed out that artists in Qatar want nothing but the return of the festival, as the activity of the artistic movement will be through this event. He added the continuation of this event will provide an opportunity for the emergence of new generations of artists and young blood in this field, and therefore I hope on behalf of all Qatari artists that this festival will continue and that it will not disappear again without justification.

The news of his comeback has had a positive impact on them, he said. They find themselves in the festival, even if they are spectators, and the presence of the stage and its art makes them feel their presence and their role.

As for remembering the old artists in this festival, Al-Mansouri said that honoring or referring to the old people in such major events and forums is very important. We thank the Theater Affairs Center for this good initiative, which strengthens our trust in the management of the center and increases our determination and desire to advance all that can be presented, in order to leave a distinctive mark that will be remembered by future generations. We will try our best to follow the steps of our predecessors, whom we are proud and proud of and for the work, they have done for us.

Mohamed Hassan Al-Mohammadi praised the role of HE the Minister of Culture in the return of the festival, and praised the efforts of the Theater Affairs Center and the organizers of the festival. He thanked them for providing the opportunity for Qatari artists to create and work, and to present shows aimed at continuing the march of the theatrical art and continuing to provide everything that serves the individual and society with social issues and useful works.

Before announcing the return of the festival, artist Faisal Rasheed had recently demanded the return of this major theatrical event, which contributes to the reunification of the artistic community in Qatar, gives the artistic and theatrical movement momentum and luster, and restores its status among neighboring brotherly countries.

He said many Gulf and Arab countries maintain the continuity of their theater festivals, which boosts the overall efficiency of art in those countries. Such a continuity contributes to the prosperity of society and enhances the awareness of its members, and produces many talents that can continuously lead the artistic movement and express the conscience of society with their messages and ideas, which are translated into art on the stage.

The 34th edition of the Doha Theater Festival will include performances by private troupes, performances at University Theater, as well as a number of seminars at the Katara Theater. The festival will be held March 16-27.

The 34th edition of the festival will honor Ali Hassan, who will be the honorary personality of the festival. Ali Hassan has worked as an actor in films, series, and theater. He was also one of the founders of Acting in Qatar. Ali was one of the first participants in theater and television works, and he won several awards during his theatrical career and was honored in many local and international festivals.
The festival will also honor theater directors, for the first time in the history of the festival. Festival directors Faleh Fayez, Hamad Al-Rumaihi, and Nasser Abdul-Ridha will also be honored, and a star stage will return to the festival in 53 years.
The festival will celebrate the 50th anniversary of the Qatari Theater Festival, which began in Qatar in the mid-20th century.