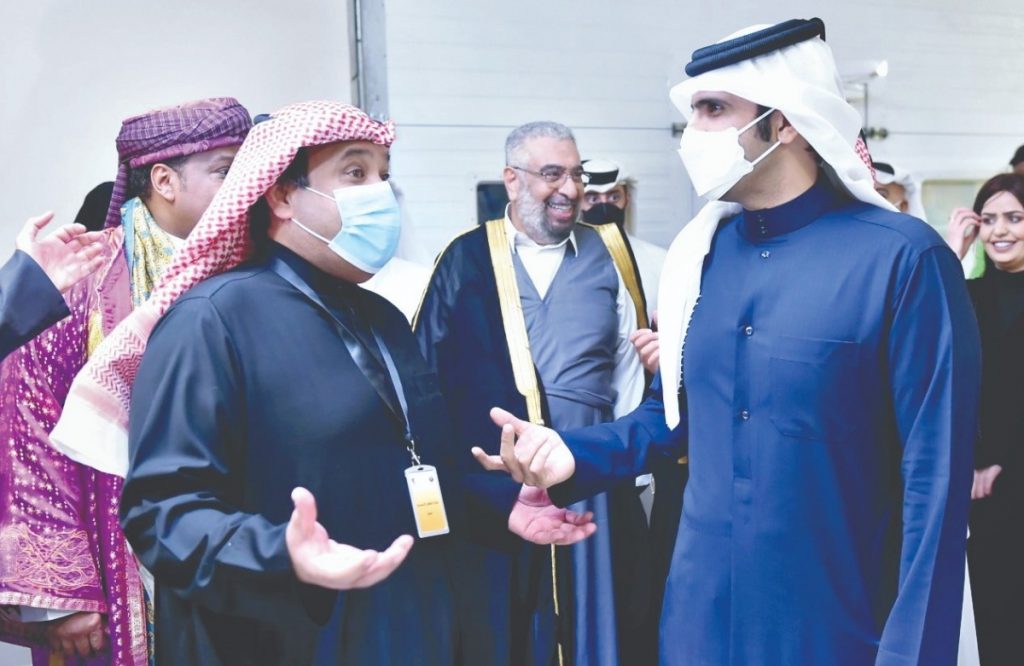 In the presence of H.E. Sheikh Abdul Rahman bin Hamad Al-Thani, Minister of Culture, the first performances of the theatrical show “Al-Aṣma’i Baqūh,” presented by the Ministry of Culture as part of the Doha international Book Fair, were launched yesterday evening at the Drama Theater in the Cultural Village (Katara). Conducted under the supervision of the Theater Affairs Center, this activity drew the attention of the public at large, who were eager to see the performance, while adhering to the Covid-related preventive measures imposed by the concerned authorities.

The new play, which opens a theater season that promises to be rich in distinguished works, is co-written by Abdel Rahim Al Seddiqi and Tayseer Abdullah, directed by Saad Burshid, and Ibrahim Lari, who assisted in its direction. The acting cast includes a fine list of Qatari actors, such as the famous Ghazi Hussein, Hediya Saeed, and Nasser Al-Momen, in addition to a group of well-known actors, including Shuail Al-Kuwari, Mohamed Al-Sayegh, Salem Al-Mansouri, Khaled Khamis, Khaled Rabea, Ali Al-Khalaf, Ali Al-Sharshni, the rising actor Munther Thani, Heba Lotfi, Khaled Al-Hamidi, Zina, and Ameera Yasser, with the participation of the Amwaj performance group, as the play comprises musical scenes based on Arab heritage.

The play recalls the famous incident related to the well-known poem of Al-Asma’ī “Ṣawt Ṣafīr al-Bulbul” to raise the very important contemporary issue of copyright and the need to protect it. It also draws attention to the question of Arab brain drain. The poem tackles the story of the plagiarism of Al-Asma’ī’s “Ṣawt Ṣafīr al-Bulbul,” and searches through the plot of the play for the poet’s rights, but ultimately finds no solution to this dilemma.

At the end of the play, Al-Asma’ī decides to migrate to the West in search of a homeland and wider horizons. Here, the play also gives hints of the future prospects of Qatar as the land of freedom and tolerance and the meeting point of world cultures, as well as an oasis of security and safety, and as an incubator of Arab and global creativity.

Abdel Rahim Al Seddiqi, writer and director of the Theater Affairs Center, said that he was delighted to present this play as part of the Doha International Book Fair, noting that it is the first time that the Qatari theater has participated in such a huge dramatic work within the activities of the ancient fair, in which the Theater Affairs Center is also participating this year with a number of puppetry performances.

On the other hand, the writer Tayseer Abdullah explained that the work is written in the simplified classical Arabic language reinforced by modern Qatari colloquial dialect. He said: “The play reveals the problem of lack of passion for reading books.”

At the end of the show, H.E. Sheikh Abdul Rahman bin Hamad Al-Thani met with the work team to convey his delightedness with their performance and efforts, stressing his confidence in them and praising the elements of the work undertaken by the director and his assistant, as well as that of the actors who dazzled the audience with their performance, in addition to the nature of the script which is consistent with the Book Fair’s slogan.