Back / العودة
You are here: You are here: » News » The aesthetics of Arabic calligraphy and its arts in Darb Al Saai 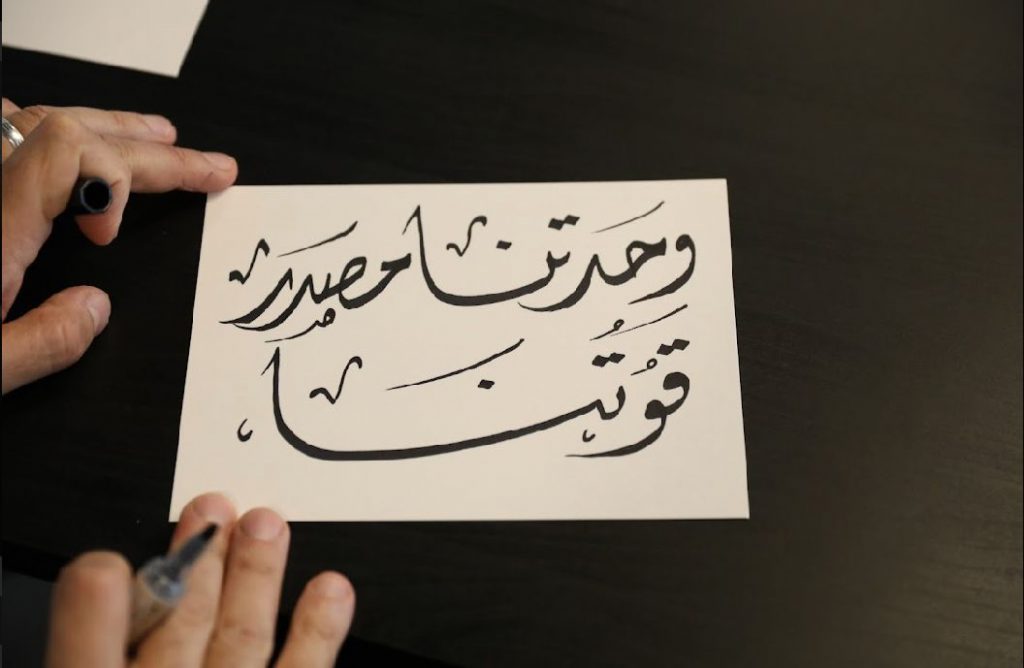 Arab and Muslim calligraphers of different schools and places were able to make Arabic calligraphy a tool for the aesthetic expression of the Holy Qur’an, combining the abstraction of meaning and the materiality of drawing, so that the creative and Muslim calligrapher was sometimes able to insert more than one line in one painting, which added splendor and beauty to his giving.

This is confirmed by the “Nahj” exhibition of Arabic calligraphy and Islamic decoration in “Liwan Art” in Darb Al-Saai, which includes a variety of creativity between letters, ornamentation, and aesthetics of formation. It was designed by a group of Qatari artists and residents, as the exhibited works represent important points of convergence between past and present, heritage and modernity in their best visual and aesthetic manifestations, because of what this art possesses with its branches and types of expressive energy and flexibility, where the elements intertwine Decorative with modern craft skills.

The exhibition reflects a historical journey of the aesthetics of Arabic calligraphy from one era to another, bearing the words of the founder of the State of Qatar, Sheikh Jassim bin Mohammed bin Thani, and phrases and wisdom that reflect the sublime meanings on which the people of this good land were brought up, including Arab and Islamic values ​​that are inherited from generations.

As for Noura Al-Maadadi, a group of the most wonderful Islamic decorations are displayed in the exhibition, as well as the works of Islamic decorations by Naima Nasser Al-Hail, adjacent to the art of miniatures with its aesthetics by Iman Al-Saad, and unique in the metal formation of letters by Saleh Ahmed Al-Obaidly, along with the lines and paintings of Fadel Kamel Al-Haddad, who wrote a set of paintings, While Hassan Ahmed Al-Hajjaj combines calligraphy and decoration with Thuluth calligraphy, while he presents the aesthetics of calligraphy on the name of Qatar, Khaled Saad Al-Masawi. Thus, ideas and lines vary so that the exhibition meets all artistic tastes.

Interest in Arabic calligraphy in Darb Al Saai is not limited to this exhibition, but there are daily calligraphy workshops offered by the Visual Arts Center, where visitors wishing to learn calligraphy arts are introduced to the most basic rules for each type of calligraphy, and these workshops allow the masses to interact, participate and practice calligraphy with its original tools.

The interest in the Arabic calligraphy was the interest in providing its tools to visitors in the Darb Al-Saai market, where Al-Dhad store displays a set of tools that form the basis for the work of calligraphers.

The calligrapher Fatima Al-Emadi, owner of the Al-Dhad store, says, “We participate in Darb Al Saai to provide calligraphy supplies of all kinds of pens and different inks, as well as pamphlets for teaching Arabic calligraphy, including a pamphlet that I prepared for teaching ruq’a calligraphy.”

She said, “We seek to spread the culture of Arabic calligraphy and demonstrate its importance in Islamic culture, as Arabic calligraphy was one of the most important arts in which Muslims excelled, so it was used in multiple forms and elegant decorations, and therefore we emphasize the importance of promoting this art in the hearts of new generations, especially in light of the reliance on modern technology.”

She added that we are trying to preserve the heritage and manual skill of the calligraphers, to show what distinguishes the Islamic society.

Besides, she added by saying that the Arabic calligraphy tools are constantly evolving, and yet we keep the old pens that are made of reeds, as well as the inks that were made by hand. There is currently a development in this industry, and the same is true for paper.

She continued by saying that we do not seek to sell as much as we are keen to spread this culture by offering courses and workshops presented by professionals in Arabic calligraphy, where everyone is targeted regardless of age, noting that Arabic calligraphy is basically a talent, but it needs continuous development, as the combination between talent and learning is It has the greatest impact on the emergence of professional aesthetic works.