Back / العودة
You are here: You are here: » News » Qatari women have established their status with flying colors

Qatari women have established their status with flying colors 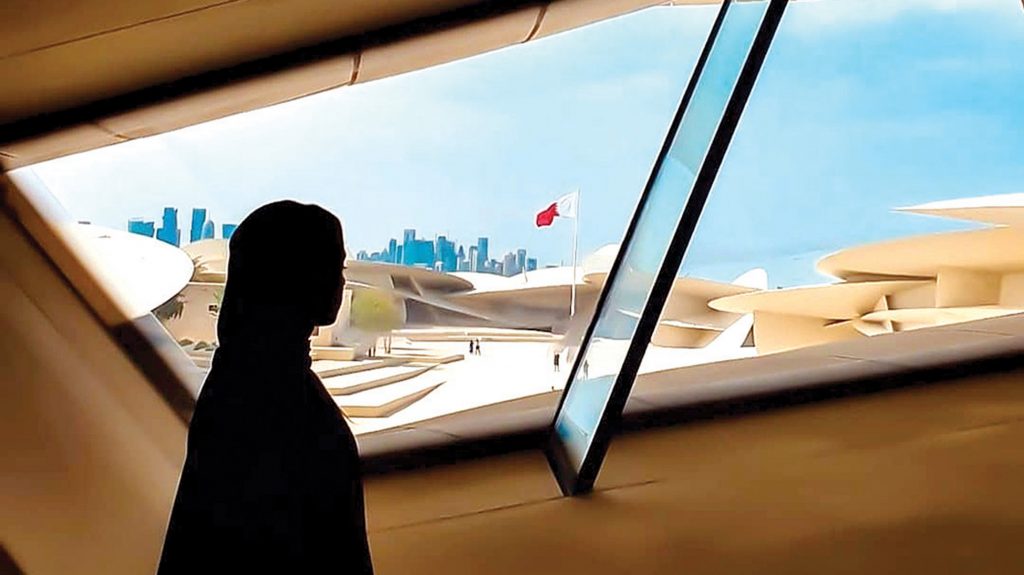 Over the years, Qatari women have positively contributed to the cultural sectors. Their presence has been a source of inspiration and benevolence that extended to cover all pillars of thought. Hence, women have played a prominent role in these fields in the State of Qatar, where they competed with male writers, plastic artists, artists and authors, in all forms of cultural expression. They made remarkable efforts through their contribution in various intellectual fields within the Qatari community. In a society that encourages girls to seek all possible levels of education and sustain the development of their skills in all areas, the role of Qatari women has become a key effective catalyst for the rapid development of the culture sector in the country.

A survey has been conducted to determine the views of a group of female artists in different cultural fields about the contributions of Qatari women to culture in general, and their current achievements in Qatari feminine literature in particular. The outcome of the survey points to the most prominent ambitions and suggestions that would develop the cultural field of women. The informants of the survey agree that Qatari women have established their status with flying colors in a society that is well aware of the prominent role of women. Hence, the state is constantly keen to enhance such role, reflecting the firm belief in the status of Qatari women and their ability to play all intellectual roles, and to perform the roles entrusted to them with full vitality, effectiveness and responsibility. Women in the world have a limited room for maneuver, but the horizons in Qatar are much broader, since women can pursue their ambitions at all levels.

Maryam Al Hammadi: “I was the first woman to run the Department of Culture and Arts.”

Maryam Yassin Al Hammadi, Director of the Department of Culture and Arts, Director General of Qatar Authors Forum, noted that women in the State of Qatar participate extensively in official and societal cultural affairs. She indicated that at the official level, many departments in the Ministry of Culture are led by women, who have a long experience in the fields of culture. She said: “Personally, I had the honor to be the first woman to manage the Department of Culture and Arts in the Ministry of Culture and the first director of the Qatari Forum for Authors. Also, many of my female colleagues have accumulated a long experience in the various fields of culture at the Ministry. There are highly competent female managers such as Ms. Shaima Al Suwaidi, Director of Legal Affairs, Ms. Amna Al Buainain, Director of Quality Department, Ms. Aisha Al Mahmoud, Director of Public Relations Department, Sheikha Najla, Director of Identity and Heritage Department, Ms. Abeer Al Kuwari, Director of Publications Department, Ms. Hoda Al-Saadi, Director of Visual Arts Center, Dr. Haya Al-Maadadi, Deputy Director of Nomas Center, and Ms. Maryam Al-Mohannadi, as well as many heads of departments”. She also emphasized that the cultural sector is endowed with cultural figures who have marked a strong presence in many fields, such as Her Excellency Sheikha Al Mayassa bint Hamad Al Thani, President of Qatar Museums Authority, whose name was announced among the most influential figures in art in the 100 List  and appeared in Forbes’ List of the World’s 100 most Powerful Women, as well as Ms. Fatima Al-Rumaihi, who leads the Doha Film Institute, and Dr. Hayat Marafieh, Executive Director of QatarDebate. Many female colleagues are outstanding at Katara, such as Ms. Malika Shreim, directors of culture and international cooperation departments, and female figures in the cultural arena such as Ms. Aisha Al-Attiyah, Ms. Abeer Al-Kuwari at Qatar National Library, and Ms. Buthaina Al-Janahi, Head of the Department of Culture and Arts at Qatar University. She noted that these are some of the names and there are still many others in the public and private sectors such as Dr. Aisha Al-Kuwari, who is outstanding in the field of books, as well as many artists who have conveyed Qatari art and heritage. She moved on to praise the owners of cultural initiatives, like writers, intellectuals, artists, and owners of cultural projects such as Forenoon Meeting in the city of Al Khor and Hawiyati Project, among many other areas where women have excelled.

Wafiqa Sultan: Honoring me today is an appreciation for Qatari women’s hard work

Today Visual Arts Center and Al-Qassar Gallery will honor the artist Wafiqa Sultan, as part of the activities dedicated to celebrating International Women’s Day. Wafiqa Sultan expressed her happiness with this honor, which she described as an appreciation of Qatari women and their hard work at a time when the Qatari plastic art scene was at its embryonic stage. She emphasized that the arena today is replete with distinguished artists, and that the success of Qatari plastic art is due to the state’s keenness to support many plastic artists and provide them with many opportunities. In so doing, the state has always placed women on equal footing with men. This enabled women to study applied arts abroad and return to attest the great attention paid to women by official institutions and society itself, which she considered one of the reasons behind her continued personal success. Wafiqa Sultan attended many international forums and exhibitions addressing the cultural dimensions of Qatar, at a time when she did not seek to practice art, but rather have her talent unleashed. She found herself in the plastic art arena without making art merely a profession for her. Subsequently, she worked as a self-employed professional and managed to make a name for herself in the area of decoration and architectural design. She pointed out that one of the reasons for bestowing tribute to her is that she sought, during her career, to combine her talent as a plastic artist belonging to the generation of pioneers with other professional interests as a businesswoman and decorator, as well as practicing the profession of architectural design and plastic arts at various levels.

Writer Fatima Al-Atabi said: “Qatari women have managed to make honorable progress at all levels, in line with the culture of society as well as the changes and requirements of the era, with the help of Allah and the support of our wise leadership”. She emphasized that there is no development and advancement of societies without a strategic plan based on fact-finding at the short and long terms. She added: “The observer of the local cultural scene in Qatar can witness the changes manifested in the flourishing culture in general and the concurrent strong presence of women in the areas of thought and literature”. She believes that the contributions of the Ministry of Culture, Literary Clubs and Qatari Authors Forum constitute a good example of this move, stressing that educated Qatari women have a strong participation and play a prominent role in this regard. The scene is even increasingly shifting towards activating the role of women in all fields, including the areas of culture, art and literature. She suggested that greater activation of women’s participation should be conducted, as their presence is increasing at all creative levels. More support should be offered to creative women, which would increase the number of female novelists, storytellers and poets, and even article writers. She said: “As the number of female intellectuals and artists has increased, their awareness has been upgraded and their eagerness to mark their presence has grown, it was necessary to pause to further activate the participation of women.”

Mona Al-Badr: Success at the family and professional levels

Actress Mona Al-Badr said: “On this distinguished day, we all celebrate the progress we have achieved and our effective contribution to the development of the Qatari society. Qatari women continue to play their strong and firm role in building the family, raising promising generations that preserve their society and achieve success. In addition, women have become a key component in various governmental and private sectors, and they have succeeded professionally. Women are now successful and competent in literature and art as well as all other fields, such as economics and engineering.” She paid tribute to women, who have spared no effort in advancing their country, noting that Qatari women, who represents sisters, wives and mother, have contributed to the great progress that the State of Qatar is witnessing today. “The outstanding status achieved by women today indicates that the contribution of women can by no means be inferior to that of men in the Arab and international cultural landscape, especially after many creative women have been honored, won international awards and represented Qatar at the regional and international levels in many important artistic and cultural forums.”

Hanan El-Sharshani: Women have made a strong contribution to literature.

The novelist Hanan Al-Sharshani said: “In our contemporary time, Qatari women have strongly influenced and contributed to the field of literature in general and to feminine literature in particular. They have proved themselves with flying colors in all areas of literature such as the short story, the novel, as well as classical poetry and dialect poetry. In addition, the emerging female writers address the issues of their generation from different perspectives.” Al-Sharshani pointed to a set of proposals that would enhance the role of women in literature, chief of which are honoring creative women, encouraging them financially and morally to enrich literature with their distinguished production, supporting young promising writers and preserving their copywrites, re-publishing Qatari feminine literary production by means of modern technology such as audio books, creating audiovisual dramatic content from such production in order to introduce the current and upcoming generations to these works. These contributions document the history of certain eras in the life of Qatari women, and it is necessary to shed light on them rather than neglect their role. Qatari feminine literature has been an independent discipline since 1970s, which constituted an early driver of growth and prosperity in all areas of Qatari society. As for the proposed solutions to some of the problems of female writers, which she wished to see realized on the ground, she said: “It is necessary to establish Qatari publishing houses that support promising writers, sponsor them, and distribute their literary production on a large scale outside Qatar, in addition to setting up a translation center that specializes in translating literary works in particular for the Qatari feminine literature to reach universal standards.”