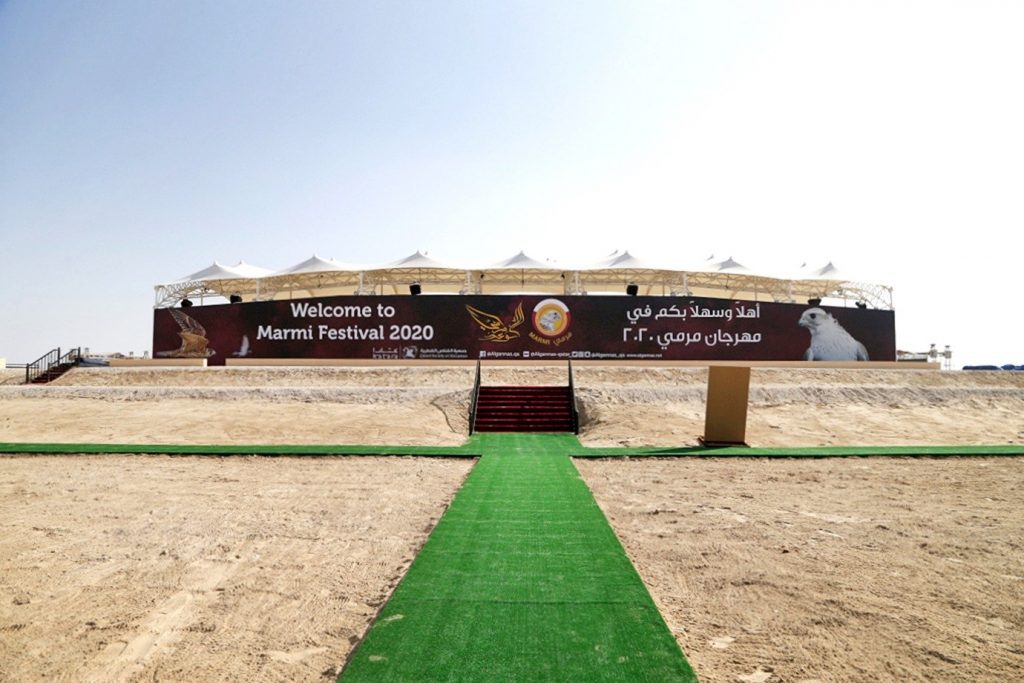 Under the auspices of His Excellency Sheikh Joaan bin Hamad Al Thani, the activities of the Qatar International Falconry and Hunting Festival “Marmi 2020″, organized by Qatar Al Gannas Society, will begin today (Wednesday) and continue until the 1st of February at Sabkat Marmi in Sealine. Mr. Ali bin Khatem Al Mahashadi, Chairman of the Organizing Committee for the 11th International Marmi Festival and President of Qatar Al Gannas Society has confirmed that Al Talaa championship will open the Festival. It will be held in the morning, and, for the first time, on rocky elevation (Hazm), not on sand elevation (Taas). He has pointed out that Al Talaa contests will continue until the 12th of January.

Mr. Al-Mahashadi said that Haddad Al Tahadi Championship for Shaheen falcon chicks and carrier pigeons will be held in the evening for three consecutive days, where one group will compete every day. On the fourth day (Saturday, 4th of January) the Promising Falconer and Junior Falconer championships will take place, then Haddad Al Tahadi Championship will resume afterwards. He noted that a huge number of contestants have registered for this competition. They have been divided into 21 groups, with an increase of 5 groups from last year’s festival. These groups will compete over the days of the festival within the schedule of the contests, which is why the Committee had to include a morning period and an evening period in the contest schedule.

He also noted that the festival venue have been equipped with all health facilities, seating and screens to follow the activities, in addition to the main lounge and daily hospitality for participants and visitors, which reflect the traditional Arab hospitality that Qataris are known for and always show to their guests.

On his part, Mr. Mohammed bin Abdullatif Al Misnad, Vice-Chairman of the Festival Organizing Committee and Vice-President of Qatar Al Gannas Society has underlined that Marmi Festival is considered to be a significant milestone in Qatari people’s culture. He also stressed the attention given to equipping the festival venue renewing its decorations every year to reflect the general taste of Qataris. It attempts at being beautiful while taking into consideration details of Qatari architecture and highlight it. The festival ensures that visitors and tourists are welcomed into the place and are enjoying this unique traditional event at an international level.

Mr. Al-Misnad emphasized that the festival and Al Gannas Society take special interest in the promising young people and they dedicate special contests for them; the Promising Falconer and Junior Falconer, along with contests for senior and professional falconers.

He pointed out that before the beginning of the festival; everything was being done to prepare for the festival in way that fits its local and international reputation. A set of standards and requirements had to be provided, starting with the road leading to the festival venue, they were paved and flags indicating the festival venue were set for a distance of more than 10 kilometers, so that small cars could reach the place. Additionally, a royal tent was installed for VIP visitors. Hospitality was provided to all visitors and participants. Big screen were installed in the site.

It should be mentioned that the 11th edition of the Marmi Festival dedicated valuable prizes for the winners of all contests.