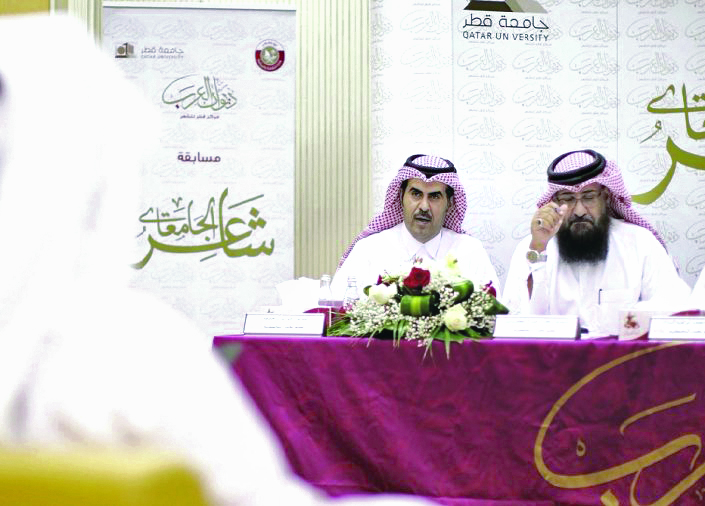 Keen to promote the third edition of University Poet Competition, the Ministry of Culture broadcast through its Twitter account a video clip containing announcements by well-known poets. Poet Zayed bin Krooz said: “The Center (Diwan Al Arab), in cooperation with Qatar University as well as civil and military colleges in the country, a new edition of the competition will be held, for us to meet you again to enjoy your poetic works”.

Poet Mubarak Al Khalifa said: “We come back to you with new literary horizons through the University Poet Competition”. Poet Lahdan bin Sabah al-Kubaisi said: “The poems are received from 16 January 2022 to 28 January 2022. Poet Ali Al-Masoudi said: “The participation is open for male students in civil and military colleges in the State of Qatar, both citizens and residents, and a specialized jury will determine the qualified candidates and then announce the winners”.

The Ministry of Culture, represented by the Poetry Center (Diwan Al Arab), announced the organization of the “University Poet” Competition, which aims to enrich the poetic movement in the country among university students.

Poet Shabib bin Arar Al Nuaimi, Director of Poetry Center (Diwan Al Arab), said: “We look forward to the competition achieving its goals in supporting young poetic talents, especially since the previous two editions of the competition achieved their objectives, and the winners and a large number of participants unlocked their artistic potential in the poetic and literary arena. They have engaged in expressing their talents, enriching the Qatari and Arab poetic landscape, after they continued their creative achievements”.

He added that the competition is addressed to students of universities and civil and military colleges, Qataris and residents, in the Classical and Nabati poetry categories. The first stage of the competition relates to receiving the participating poems through electronic registration. In the second stage the relevant poems are sorted. Then the qualified candidates meet the specialized committee, and the process continues up to the coronation stage. Three winners will be announced in the Nabati poetry category, and three in the Classical poetry category.