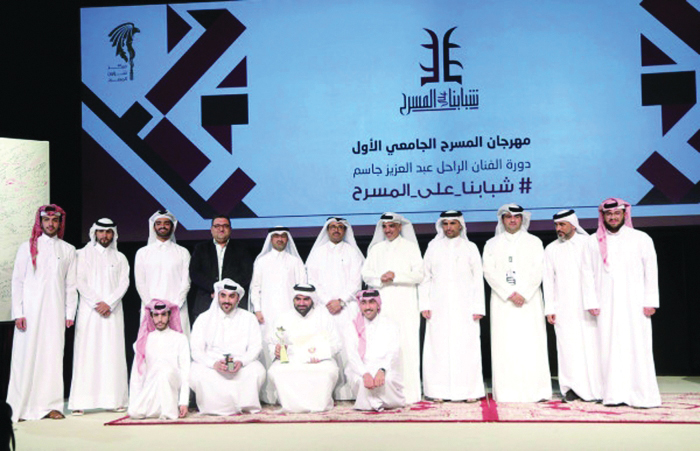 The Ministry of Culture and Sports (MCS) has announced that a plan for the features of the new theater season and Center strategy in 2020 is under development. All details would be revealed during a press conference to be held by the Center for Theater Affairs in the coming period. In this regard, artist Salah Al Mulla, Director of the Center for Theater Affairs has explained that work is in full swing to give the theatrical movement more energy to continue all the work that had been presented over the past season.

Mr. Al Mulla has noted that right now focusing on the promising young people is of the utmost importance, as the Ministry believes firmly that they would play an essential role in the theatrical movement in the future. Therefore, the “Our Youth on Stage” theater festival was held in its first edition last year, and a second edition is currently being prepared. Additionally, many courses and workshops have been organized recently to improve and qualify young talents. The Center also supports all types of young artists who belong to all sections through a plan developed by the Center to provide more supportive means for young people to achieve what they aspire to. Therefore, several meetings have been held with the promising Qatari theater youth to be acquainted with their wishes to keep evolving.

Mr. Al Mulla has also confirmed that the Centre will continue developing the performance of the local youth theater by supporting the second edition of the University Theater Festival “Our Youth on Stage”, which was a great success last year and witnessed the competition of five theatrical works from four universities and institutes of the State. He has pointed that youth centers and clubs spare no effort in supporting young people, as they have cultural committees that provide all support for theater lovers. Additionally, civil theater groups open their doors to everyone who loves theater, the father of all arts. He added that the theater season has witnessed several youth participations, as young and old performers stood together on the same stage, which gave those young people the opportunity to gain more experience. Many awards will be presented to the promising actors who participated in works of the current season.

Mr. Al-Mulla revealed that the Center has developed plans to embrace and care for the talented young people who will show their creativity during the festival by providing theatrical work opportunities for them. The Center also plans on engaging them in their own shows so that they would be able to compete during this season. Moreover, works of “Our Youth on Stage” have participated in international university festivals in Qatar’s name, for example Qatar University’s show called ” Young, but” participated in the 8th Afaq Theatre Festival in Oman and was awarded for best integrated theater performance.

For her part, Iman Al Marri, director and author of “22 Bosat” play, which participated in the first version of ‘our youth on the stage’, thanked the management of the Center for Theater Affairs and the university theater festival, which have brought back spirit to youth theater and have become a reason for young people to include acting within their college activities. This is considered a big step towards the evolvement of cultural and educational movement; especially that theater has a great role in spreading awareness and advancing societies, Youth Theater, in particular, aims to reveal the creative talents of young people, as it is well known that youth are the pillar of development in all civilized societies.

Ms. Al Marri explained that she is in a group called “22 Below Zero” and they had great energy and wanted to show their creative works. “Our Youth on Stage” Festival has been the perfect place for them to get this creative energy out. They showed their play “22 Bosat”, which tackles current issues that the Arab region witnesses as well as local issues in a funny way. She praised the efforts made by those responsible for the theater for bringing about appropriate solutions for the difficulties the artists faced, providing all kinds of moral and material support for them. She added that they helped us through organizing training workshops before the festival, which improved the performances as well as the level of writing scripts, producing and directing. Finally, Ms. Al Marri said that she thanks Allah for being accepted by the audience and receiving a lot of awards both individually and collectively, and that she wished to take the opportunity to thank all members of the 22 Below Zero group for their efforts, dedication and loyalty to work in addition to bearing with the situation back then. She wishes that the second version of the youth festival would be at the same level of preparation and planning and hopes that more workshops would be provided and said that they young artists cannot wait for this second version of the festival.

For his part, Saed Abu Afifa, executive director of the play “22 Bosat”, said: “the 1st edition of the university theater festival, “Our youth on the stage”, is for us the ideal place for young talents of students to emerge in the various fields of theater, whether in writing, directing, decor, acting, or fashion.” And as for their participation in last year festival, he said: “we are proud of our participation in the festival, which was like a platform for students to unleash the energy within and show their own readings and points of view regarding popular issues happening around them in the region. We aimed to use street theater and move away from the classical Italian frame of theater. We wanted to discuss issues and break barriers through stepping away from regular theater. We won awards for best script, best costumes, best sound effects, best actor in supporting role, in addition to the Special Committee award. We decided that the best way to participate in this beautiful event is to rely on ourselves in everything whether it was writing, directing, composing or singing, so that we could achieve the most benefit from the opportunity that was available to us. Moreover, we wish to take the opportunity to thank the Ministry of Culture, represented in the Center for Theater Affairs. We have achieved what we aim for, as our work was highly received by audience, we were awarded and we also managed to deliver our message, for which we formed our group, 22 Below Zero. We are interested in presenting issues of the Arab region in a different way. We are anxiously waiting for the next version of the festival and we hope to participate in a memorable way.

Ms. Iman Al-Titi, a comparative literature student and researcher at the Doha Institute for Graduate Studies, says: “the 1st edition of Our Youth on Stage festival was our first experience as students of the Doha Institute for Graduate Studies. This step was met with great enthusiasm from students and academics in the institute and we were very excited about it, especially since all it was the first theatrical experience for all participants. I wish to salute and thank everyone who participated in this festival and we thank all the support and encouragement that meant a lot to us as it pushed us to present our best.

Ms. Al-Titi added: “this unprecedented moral encouragement and support is maybe what got me to go with my first directorial experience in the play “Beltaa Almarboutah” with which we participated in the festival. It was a reason to show the significance of team work, as a group of male and female researchers contributed in this play to symbolically present results of literature studies, political and social experiences as well as life experiences and specialties in the play.

Ms. Al-Titi, finally said: “One of the most important gains from this wonderful experience is that a great number of the institute students are to participate in the second edition of the festival. They are all excited and want to show their best. They broke the theater barrier and have become used to going to theater and are enthusiastically ready for theater work again.