Our children revive the heritage in the Marmi Square 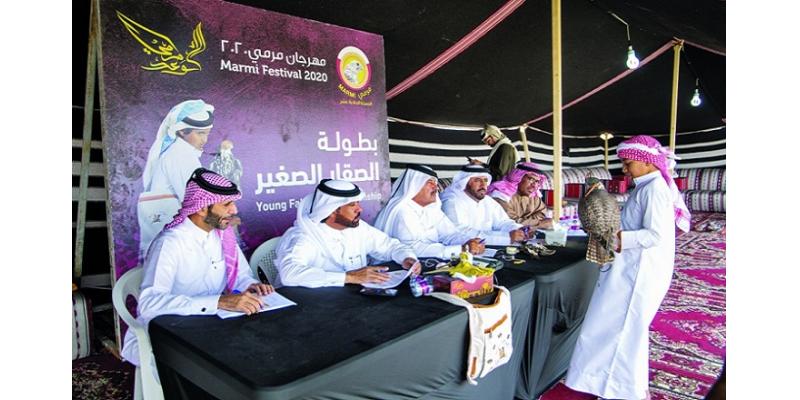 Yesterday, Saturday, the competitions of the “Little falconer” and the “Promising Falconer” were held at the 11th Marmi Hunting and Falcons International Festival, which is held under the patronage of His Excellency Sheikh Joaan bin Hamad Al Thani and organized by the Qatari Falcon Hunting Association. Activities of the festival will continue until February 1st .

5 of the little falconers, and two other promising falconers, won the two championships, after defeating their competitors.

The Organizing Committee announced the names of the winners of the promising Falconer Championship in the (Al-Tabaa Falcon) and (Al-Garmosha Falcon) categories, namely:

As for the results of the winning centres in the Little Falconer Championship, these will be revealed at a later time.

On the other hand, during the morning period, championship qualifiers for the (Tala Falcons) type were held. The festival organizing committee decided to postpone the participation of the third group due to weather conditions. They will be delayed to another day that the committee will later determine and inform the group members of to prepare to compete in an appropriate atmosphere, in order to maintain the conditions for honourable competition so as to give equal opportunities for all.

Mr. Khaled Saeed Al-Sulaiti, Chairman of the Inspection Committee of the eleventh International Marmi Festival, for falconry and hunting, said that the winners of both championships are 10 falconers, 6 of whom will be qualified for being awarded the top positions by choosing the best three from each championship. He added in press statements that the Little Falconer Championship is for the age Starting from 6 to 10 years and the tournament is based on the youth’s familiarity with falconry and bird raising, as a set of questions related to bird breeding and hunting is directed to them, including special questions about bird diseases, types of treatment, falcon age phases and others.

In the same context, Al-Sulaiti pointed out that this year the organizing committee for the Marmi Festival included 3 random questions that are not prepared by the young contestants, with the aim of showing the excellence of the participants and noting their experiences in this wide field and the extent of their familiarity with the information about birds, their types, methods of raising and hunting them.

Al-Sulaiti explained that the number of participants in the Small Falcon Championship exceeded 20 contestants, who competed with each other for the championship award at the headquarters of the Marmi 2020 Festival.

Regarding the “Promising Falconer” championships competitions, the head of the Inspection Committee said that it was allocated to the age group from 11 to 15 years. The participants in this tournament are subject to the “Da’w” (calling the falcon), but not for the usual distance of the official “Da’w” tournament, as the distance was limited from 400 to 200 meters, indicating that The festival’s “Da’w” committee is the one who took the “Da’w” test of Promising Falconers in cooperation with the inspection committee. As to the number of participants in the Promising Falconer Championship, Al-Sulaiti said, “We have two categories in this championship. The first is “Al-Garmosh Falcons” category, and about 34 falconers participated in it, and the second is “Al-Tabaa Falcons” category in which 14 falconers participated.

For his part, Mr. Mohamed Mubarak Al-Ali, head of the polling committee, explained that the reason for postponing the participation of the third group in the “Al-Tala Falcons” championship yesterday was the bad weather.

He added, “Very fast south winds blew, which we thought would hinder the performance of the participating birds,” adding that the first and second group competitions took place smoothly and the change in weather conditions started with the beginning of the third group.

Regarding the date of the participation of the group that was postponed, Al-Ali said that the date will be determined later, and the falconers in the group will be informed a sufficient time before that.

Al-Ali pointed out that the “Al-Tala Falcons” championship is considered one of the finest types of Falcon hunting competitions, as it is considered by falconers to be the basis of falcon hunting. The falcon lies inside the car, and when the race starts the falconer performs the process of “removing the cloth covering the bird’s head”. Because of the sharp eyesight of the falcon, it flies in the sky to carry out a comprehensive survey of the area over which it flies. As the Houbara (the prey) attempts to escape and hides behind short plants, at a distance determined by the organizing committee, and the falcon attempts to pounce on it.

The jury sets in advance a timing for the bird to get out of the car, and if it exceeds this time, it is subject to exclusion. Also, when a bird flies in the sky, if it cannot see the Houbara, it is also excluded from the competition, and the one which wins is that which comes out in the appropriate time and hunts the Houbara live. As the clear, dust-free atmosphere is ideal for falcon and falconer, sandstorms and dust loaded in the air obscure vision and hunting becomes impossible.

In separate meetings with the participants in the championships of the “Little Falconer” and the “Promising Falconer,” the participant in the championship of the “Little Falconer”, Khaled Muhammad Al-Mahashadi, said that the questions posed by the committee during his participation were very easy, explaining that he had been learning falconry for years from his family and memorized all that relates to birds, including matters related to breeding, hunting and types of food that is recommended for them, as well as knowledge of bird diseases and ways to care for them. Al-Mahashadi thanked the Marmi Festival committee for organizing special tournaments for young people, explaining that such tournaments develop the skill of falconers while still young, and also calls for pride when falconers win the prize determined by the committee.

For his part, the participant Saeed Ali Al-Jamila in the “Promising Falconer” Championship said that he is participating with a team of 3 falconers who are his brothers and cousins. He added that his family are known for their love of falconry and he drew from them all that relates to birds as regards to their training, feeding and hunting…etc. He further pointed out that he had prepared well his bird to participate in the “Promising Falconers” Championship. Furthermore, He commended efforts made by “Al-Da’w” and inspection Committees that supervised their participation in the championship and facilitated registration and participation procedures. He also thanked the Marmi Festival organizing committee for granting him opportunity to test his falconry skills.

Abdul Hadi Al-Marri praised the Marmi festival, which is considered one of the festivals concerned with preserving the heritage of fathers and grandparents, preserving the hobby of falconry and working on its continuation, as it is considered one of the oldest country hobbies, and has been passed on from one generation to the next from parents and grandparents.

He pointed out that Qatar is one of the countries interested in reviving the heritage of parents and grandparents and preserving it from extinction, by organizing and setting up international and local festivals that are allocated for the hobby of falconry and hunting, and contribute to the consolidation of these heritage hobbies among children and future generations. He further thanked all those in charge of the Marmi Festival for organizing this wonderful festival which the falconers wait for every year.

Tamim Hamad Al-Misnad, a participant in the “Promising Falconer” championship, said that he expected to win first place in the championship, since he had fully prepared himself in advance to enter this championship that needs diligence to win, especially as all contestants have high potential.

Khaled Mohammed Al-Mahashadi, a participant in the “Little Falconer” Championship, said: His participation in the Championship has gained him much knowledge in the hobby of falconry, explaining that this competition has benefited him and the rest of the participants as he learned several issues related to falcons.

He pointed out that the existing committee supervising this competition displays some tools related to the falcon and asks contestants for their names, according to which the points are calculated for each contestant.

He explained that he prepared himself for this competition by getting acquainted with all the supplies of birds and falconry, so that he would be ready to answer the questions asked by the “Little Falconer” competition committee.