Back / العودة
You are here: You are here: » News » Minister of Culture: The Doha International Book Fair Aims to Localize Book Culture 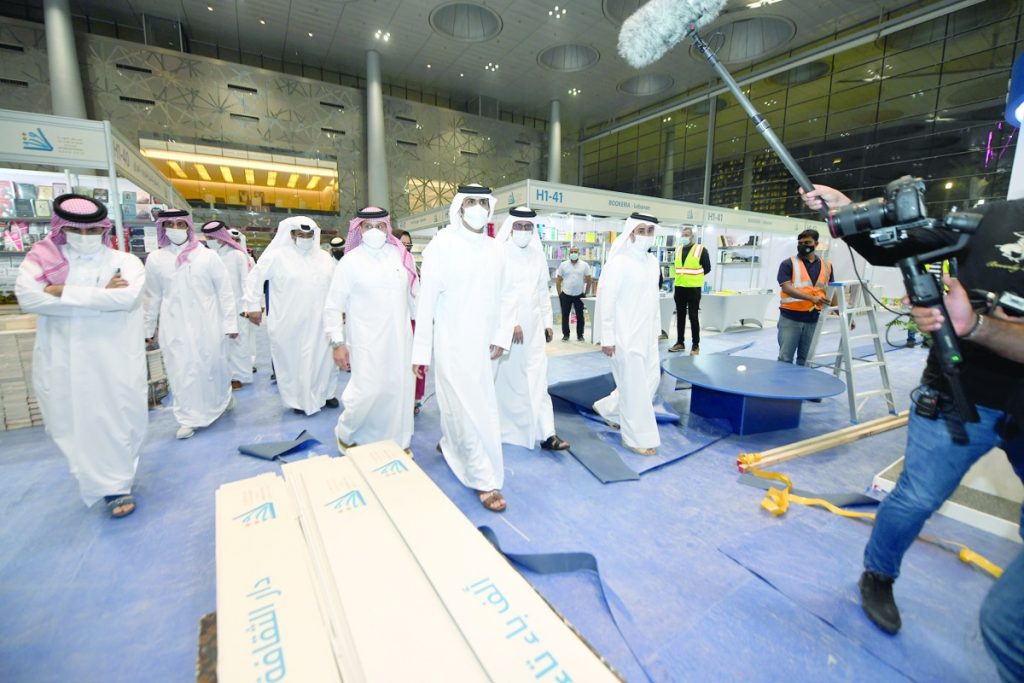 His Excellency Sheikh Abdul Rahman bin Hamad Al Thani, Minister of Culture, reaffirmed that the objectives of the 31st Doha International Book Fair, which started yesterday at the Doha Exhibition and Convention Center, is the “localization of book culture in Qatar.” He considered the fair an outstanding opportunity to promote reading and to create space for knowledge and science.

In his comments after the opening ceremony, His Excellency said, “This year’s book fair is the biggest edition of the Doha International Book Fair ever, despite the exceptional circumstances of the pandemic. This year, there are 430 exhibitors from 37 countries showcasing their publications in 845 booths.” He noted that the fair, which started in 1972, represents Qatar’s cultural leading position and its role in promoting knowledge and culture, and that this year’s exhibits are designed in uniquely creative way. He further commented that this year’s fair has a distinguished level of participation from Qatari publishers, as the Ministry of Culture provided support and waived their space rental and service fees. This year’s fair has new booths for various state agencies, such as the Ministry of Education and Higher Education, the Ministry of Charitable Endowments and the Ministry of Municipality and Environment, as well as numerous organizations, such as Qatar University, Qatar Museums, Qatar National Library, and Al-Jasrah Cultural Club, among others.

Numerous state organizations are contributing to the 31st Doha International Book Fair through partnerships, as they are organizing reading workshops and various other cultural activities and events. Other contributors include Qatari cultural organizations whose goal is to promote cultural and intellectual production for all age groups.

The United States is a guest of honor at this year’s book fair marking the end of the Qatar-USA 2021 Year of Culture. Visitors to the fair can explore various aspects of American culture and American intellectual products.

Commenting on the US participation in the fair, Natalie Baker, Chargé d’Affaires of the U.S. Embassy stated that, “At the conclusion of the Qatar-USA 2021 Year of Culture, and as the two nations celebrate 50 years of bilateral relations, the U.S. Embassy is participating as the guest of honor in the 31st Doha International Book Fair.”  She added that the US is participating in the fair to promote this year’s theme, “Knowledge is Light,” which can be seen on the US embassy’s booth design. The design was made by Arab-American designer Christina Al-Khater. The design conveys a message of culture and learning as essential tools for creativity and enabling humanity to achieve its highest potential. The Chargé d’Affaires added that the U.S. booth boasts a record inventory of over 7,000 books for purchase at discounted prices. The booth has over 750 titles by renowned American authors including everything from children’s books to best sellers. Other US based publishers had their own booths at the fair, and some offered film screenings and English language learning workshops.

Commenting on the promotion of cultural activities in the two countries and the success of the Qatar-USA 2021 Year of Culture, Chargé d’Affaires of the U.S. Embassy stated that such events help bring our peoples together and offer valuable opportunities for the exchange of ideas. These activities, which included cultural, sports, arts, and music events, were widely attended both in Doha and in the US. She noted that Qatar Museums held several such events in the US, and they were well received. Some Qatar-USA 2021 Year of Culture events are still in progress, as discussions are underway between Qatar Museums and a number of American museums to hold collaborative exhibits in the near future.

The Italian Embassy in Qatar is currently participating in the book fair with a booth dedicated to children’s books. The booth offers visitors the opportunity to meet children’s books authors and illustrators, and to participate in book readings and workshops.

Alessandro Prunas, Ambassador of Italy in Qatar, expressed his excitement about his country participating in the book fair. “Given that it is the first institutional participation for Italy, the focus is on younger generations because Italy and Qatar are fully invested in children’s education, abilities, and rights,” he added.

Ambassador Prunas explained that the Italian booth aims to introduce children to the Italian language through reading, interactive learning, illustrated materials, and workshops. “The booth focuses on children’s books published in Italy by Italian authors, and it offers various activities throughout the duration of the fair,” he commented.

There are considerable levels of participation in this year’s fair from Gulf and Arab organizations, including the Secretariat General of the Gulf Cooperation Council, the Omani Ministry of Culture, Sports and Youth, Sharjah Book Authority, and the ministries of culture of Morocco, Algeria, Sudan, and Egypt. Numerous international, particularly American, publishers are participating in the fair in addition to official representations by the embassies of Palestine, Syrian, Japan, South Korea, Kyrgyzstan, Indonesia, and Russia, as well as the Azerbaijani Ministry of Culture.

The 31st Doha International Book Fair offers several cultural events and activities for all age groups, including theater performances such as Al-Asmay Baqou and live streamed lectures. The fair is open every day from 9:00 AM to 10:00 PM, except Friday when it opens from 3:00 PM to 10:00 PM. Following the guidelines of the Ministry of Health, all visitors and participants are required to adhere to the safety measures, and the fair facilities are only allowed to fill up to 30% of their maximum capacity. Visitors to the fair are required to register in advance through the fair website, and only those who are vaccinated with at least 14 days since their second dose, including children aged 12 and above, and those who recovered from COVID-19 at least 12 months ago, are allowed into the premises. All visitors are also required to have download the Ihtiraz application on their cell phones. The number of children under the age of 12 cannot exceed 10% of those present, and they are required to have rapid antibody testing with negative results no longer than 48 hours prior to arrival at the fair.