Back / العودة
You are here: You are here: » News » Minister of Culture Affirms Qatar’s Keenness to Promote Reading 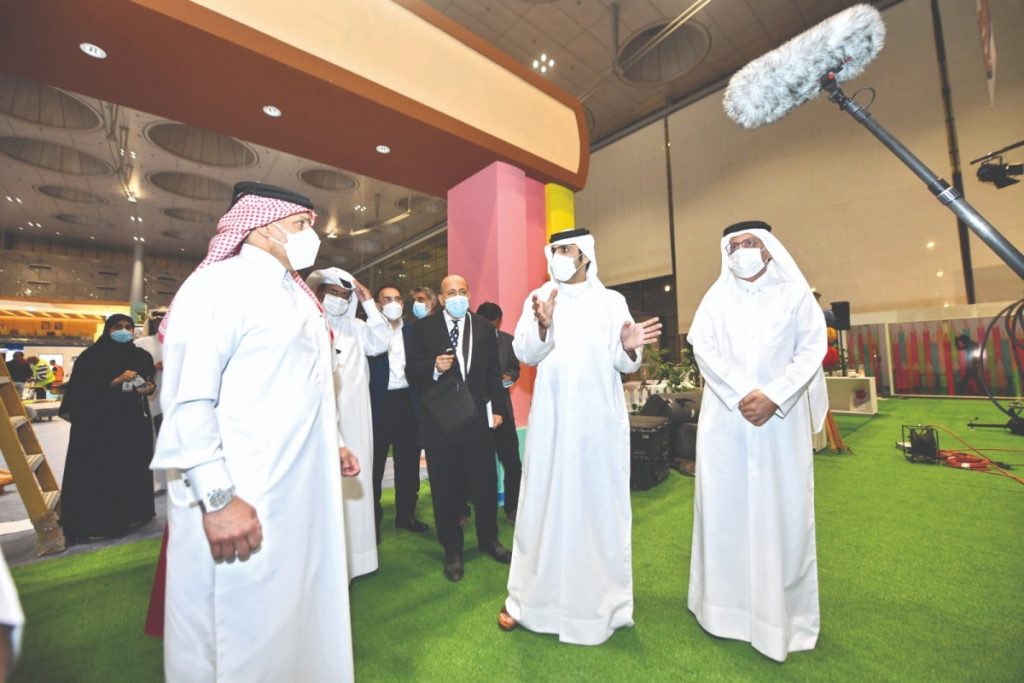 His Excellency Sheikh Abdul Rahman Bin Hamad Al Thani, Minister of Culture, affirmed that the aim of holding the Doha International Book Fair in its thirty-first edition is to attract the public back to reading, after some began to refrain from it. His Excellency said in a dialogue session that took place prior to a tour by His Excellency amid the Fair’s pavilions, that this role is entrusted to the Ministry of Culture, and that the Fair is marking its fiftieth edition this year, which began in 1972 and was the first Fair in the Gulf Cooperation Council region; where Qatar represents one of the pioneers in this regard. He also explained that the Fair is the largest at the present time, despite the challenging time the world is going through nowadays due to the COVID-19 pandemic.

His Excellency, furthermore, said that the number of participants is approximately 430 from 37 countries, and the number of booths in the Fair reached 845. He also indicated that the Fair is being held despite the COVID-19 conditions that caused the cancellation of the last edition in 2021. His Excellency the Minster, moreover, explained that the Ministry of Culture has taken all necessary health precautions, and the attendance rate has been set at 30%. He also added that children under the age of 12 cannot visit the Fair, but they are not excluded from this important event, as they are the young generation that we rely on in the future. The Ministry, however, organized several activities for children over 12 years of age, and for those under that, in addition to a TV coverage dedicated for them throughout the day; including reading some books, presenting a number of puppet shows, as well as some activities in coordination with Qatar TV.

His Excellency also said that 2022 edition’s fees have been waived for all local publishing houses, taking into account the losses incurred by publishing houses during the pandemic period. The Ministry also facilitated the customs clearance process for the participating foreign publishing houses. The Minster added that the Fair is not just a book event, but a general cultural event not limited to the geographical scope in which it is held. This year, he detailed, there is a performance set to be staged titled “Al-Asma’i Baquh”, produced by the Ministry of Culture, dealing with intellectual property rights. He also added that one of the Ministry’s goals in this edition was for publishing houses to go to schools, but due to precautionary measures by the health authorities the Ministry was unable to perform this activity. The goal was to expand the geographical scope of the Fair to include all of Qatar but the current circumstances prevented that, and therefore “Al-Asma’i Baquh” is made part of the indoor cultural activities in the Fair. As for the seminars and sessions scheduled, the Ministry spared no effort in various ways to offer a variety of distinguished ones.

His Excellency the Minister, in addition, stated that the poetry reciting events will include poems in vernacular (Nabatie) and others for classical poetry in standard Arabic. He explained that the Ministry was unable to host a large number of poets from outside Qatar due to the conditions imposed by the pandemic, but it promises visitors that the coming editions will witness more of the distinguished poetry events and more meetings with a large number of thinkers from inside and outside Qatar; stressing that the number achieved this year is not low. He added that there are also some sessions that will be held remotely and will be available on the Fair’s website and application.

His Excellency the Minister of Culture, furthermore, indicated that book fairs in all countries are always keen on the participation of government agencies, which represent very important additions because these entities have their own valuable intellectual productions as well. The Ministry of Culture, for instance, publishes many books and translates many of them as well, and the Ministry of Endowments does the same. Moreover, there are specialized-content books such as those issued by the Ministry of Justice. From here rises the importance of these participations and becomes clear to us. This is in addition to the participation of a number of different centers and institutions; as the Fair represents a platform for communicating thoughts and intellectual additions created by these entities.

Regarding the guest of honor of the thirty-first edition of the Fair, His Excellency affirmed that the United States of America made a distinguished participation at the Qatar-USA Year of Culture 2021 by publishing a large number of books. He added that the Fair this year will witness a participation from eight embassies.

On a different note related to the books’ prices, His Excellency said that the Ministry of Culture cannot interfere in the commercial policy of the participating publishing houses, but it facilitated all matters for the participating publishing houses in order to reduce prices; for example no fees were applied on occupying the spaces at the Fair and the customs clearance of books was done through the Ministry as well.

Finally, regarding the display screens placed in the Fair, His Excellency said that the aim is to facilitate things for visitors by showing information on regular basis on these screens such as the screen displaying the developments happening in the Dar Al Kutoob Al Qatariya (National Library) and how it will look after development; all within the context of highlighting the various cultural projects in Qatar.

Regarding the reading guide service available at the Fair, His Excellency Sheikh Abdul Rahman Bin Hamad Al Thani indicated that this new service is offered for the first time in the Fair as many visitors cannot determine the topics that suit them, so the guides’ role comes in guiding the visitor who wants to know what to read. Visitors can ask any reading guide in the Fair to express interest in what they want to read.

His Excellency, moreover, said that the Ministry did not want our young children to be deprived of enjoying the Book Fair, so it was agreed with Qatar TV to broadcast the events that will be held in a number of pavilions such as the puppet shows, reading zones, and interactive competitions, which are all but cultural competitions, in an attempt to document everything that happens in the Fair for children in Qatar; where the publishing houses participating in the Fair’s distinguished pavilions display their history and achievements.

In reply to a question asked by our colleague Sadiq Al-Ammari, editor-in-chief, about the new event dedicated to the newspapers, His Excellency the Minister of Culture explained that it is one of the events that he personally got excited about to be included in the Fair in order to urge the younger generations participate in this domain, and the Ministry wanted the event to take place and there would be prizes for children from the editors starting from next year when the pandemic ends and we have plenty of time to achieve this goal.

His Excellency also commented to media on the attendance level which is not full capacity, and explained that the Ministry counts on media’s social responsibility to deliver the benefit behind the sessions that will be held.

In a reply to another question by the editor-in-chief about the level of censorship in place at the Fair, His Excellency explained that the Ministry is keen to have censorship over anything that might negatively affect morals and religion. He added that that the Ministry has been keen to open its doors to all publishing houses and writers and encourage them to confront thought with thought. “The red line by the Ministry includes any issues in relation to ethics and religion”, the Minster added.