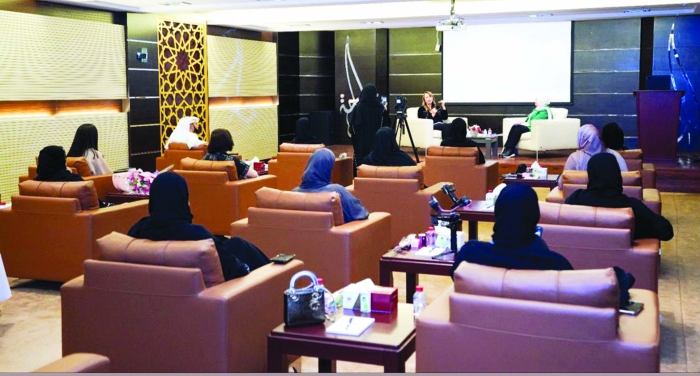 The Media Center for Youth, which is affiliated with the Ministry of Culture, hosted Al-Jazeera’s correspondent in Palestine, Jivara Al-Budeiri, in an interactive symposium on International Women’s Day at the House of Wisdom Hall in the Ministry of Culture. The symposium shed light on women in wartime and how to manage press coverage.
The symposium, which was held on International Women’s Day, which falls on March 8, witnessed a remarkable public presence. The symposium began with details about the life and birth of Jivara Al-Budeiri and the reasons that led her to enter the world of journalism.
Al- Budeiri also discussed the details of her arrest by the Israeli occupation forces during their press coverage in the West Bank and Jerusalem, and how the occupation forces treated her. At the same time, she praised the role of the field correspondent during reporting and covering events that relate to many events and details.
Al- Budeiri mentioned during the seminar some of the most important events she faced during her career as a journalist. There is an urgent need to shed light on what journalists face during field reporting, especially if they are women, she stated.
Al- Budeiri commented on the disparity between male and female reporters’ coverage, adding that humanitarian issues and how to deal with them are not open for discussion in the press.
At the end of the symposium, Al- Budeiri thanked the Information Center and the Ministry of Culture for this large symposium, which she said was the best thing women can be offered on International Women’s Day.

The media symposium was moderated by Buthaina Abdul Jalil, who confirmed that she was happy to have an interview with a prominent Palestinian journalist coming from Jerusalem, which carries many of the scenes she witnessed during her 22-year reporting period.
For her part, Al-Badr said in a press statement that she is happy with this untraditional celebration of women, as it sheds light on another aspect of women’s work in general and media women in particular. She praised the contributions made by women in various fields, which have proven that they are capable of being participants and not competitors to men, as construction is only complete with them.
The “Women in Media during Wars and Field Coverage” symposium is one of a series the Youth Media Center seeks to organize as part of its role in supporting working women, in addition to its media role in promoting women in the media.