Back / العودة
You are here: You are here: » News » Ibrahim Al-Jaidah Praises the Minister of Culture’s Motivating Visit to Al Jasra Club 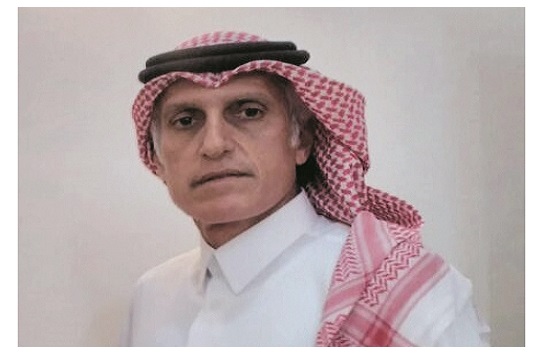 Mr. Ibrahim Al-Jaidah, Chairman of the Board of Directors of Al Jasra Cultural and Social Club, expressed his appreciation and gratitude to His Excellency Sheikh Abdul Rahman Bin Hamad Al Thani, Minister of Culture, for His Excellency’s visit to the Club last Sunday.

Mr. Ibrahim Al-Jaidah, in this regard, said: “This visit represents a moral motivation for the Club’s management team and all its affiliates, creative writers and artists, to continue the efforts spent on achieving the message of the Ministry of Culture set for the desired goals; within the framework of our country’s strategy to achieve the status of knowledge society and cultural and scientific development.” He also added that His Excellency Sheikh Abdul Rahman Bin Hamad Al Thani, Minister of Culture, is known for his ambitious programs, future aspirations, and keenness to combine enlightenment thought with hard work. Al-Jaida, moreover, expressed that Al Jasra Cultural and Social Club will be a strong support for HE the Minister of Culture to achieve the aspirations of the Ministry of Culture for the best of the future of our country and our generations, stressing that the visit will absolutely leave a positive impact on the Club to organize more programs for the benefit of Qatari cultural entities.

His Excellency Sheikh Abdulrahman Bin Hamad Al Thani, Minister of Culture, visited Al Jasra Cultural and Social Club and met during his visit with a group of writers and intellectuals who are members of the Club, where they exchanged views on upcoming cultural projects, and discussed ways to intensify efforts that would broaden the cultural process and scene in Qatar.

Al Jasra Club is currently undergoing a noticeable literary movement through its cultural salon, which  holds a gathering almost every week, in addition to its release of its magazines “Al Jasra Cultural Magazine” and “Al Jasra Arts Magazine”, in addition to issuing “Cultural Issues” publication. These periodicals enjoy a remarkable interaction by the readers in the Arab world. Additionally, Al Jasra provides the audience with the broadcast of the late musician Abdulaziz Nasser; a broadcast by the Club on its website, highlighting the momentum and development of the Qatari and Arab cultural movement. The Club also plans to establish several new cultural projects in the coming period to enrich the cultural movement; all to be added to its many recent achievements and on the basis of its fundamental role in the modern Arab literary history.

It is worth notice that the Club was founded in 1960, based on a promising vision and a good reading of the future for a noble purpose. Since the Club crossed the sports framework of its initial work scope and joined the cultural framework in 1972, it formed with the official frameworks a source of Arab, local and even international culture. This, as a result, made the dream come true to gain such privileged status with the aim of raising the profile of culture in Qatar and the Arab world by providing informed cultural and civilizational achievements.