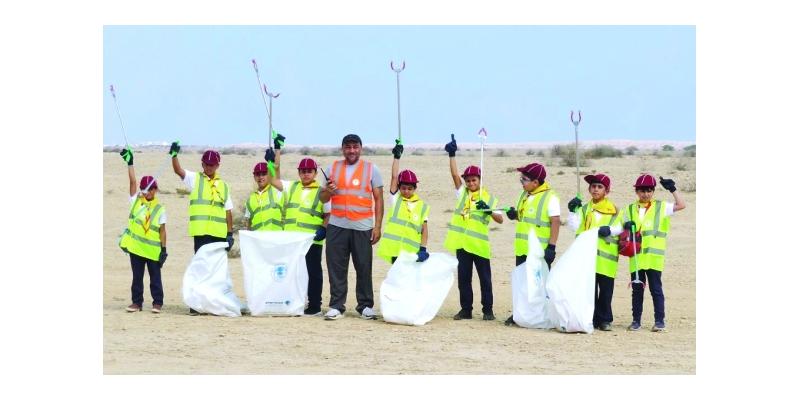 The FEC has implemented several environmental projects and campaigns that targeted various segments of society, especially school students and aimed at spreading environmental awareness. More than 6 environmental campaigns were conducted in 2019 by the FEC, which included campaigns for wild farming and cleaning up areas of land. These campaigns were accompanied by some sports activities, scientific lectures, heritage and entertaining performances.

These are not the only achievements of the FEC. It has also organized three environmental camps targeting young people, through which they aimed at establishing environmental values ​​and proper behaviors among the participants as well as urging them to get involved in protecting the environment and embedding it as a national duty. The FEC has also worked to encourage and support youth initiatives that aim at protecting and improving the environment.

Additionally, the FEC has held a national competition in which State schools participated. Since its foundation, the contest went through several stages which contributed to elevating and developing it. This year, the contest has included two main sections: the general contest for schools and the special contest for FEC members in schools. Schools which came in the first three ranks in the best school category in the general contest were awarded. Other categories included best school garden and best male and female environmental pioneer. Such contest are held to create competitions between schools when it comes to setting future plans and programs for raising awareness related to the protection of the environment.

Moreover, more than 80 environmental workshops and lectures have been organized by the FEC for many schools and some scientific organizations, whether inside or outside the Center.

FEC has attempted at diversifying its programs and activities through organizing a summer program this year for one month. This program is a comprehensive summer activity that targeted girls. It included many programs and activities that aimed at taking the participants out of the regular routine and get them involved in a more participating and competitive surrounding, by engaging them in summer activities in a scientific and entertaining context directed at their needs and abilities. Various workshops have been organized four days a week which included field trips and varied activities with the aim to realize the highest levels of independence and community inclusion.

Moreover, with regard to scientific research and studies, the FEC has cooperated with certain scientific institutions and organizations as well as Ministries of state for the purpose of implementing many strategic researches which would be of concern to the State, including: “The National Survey Project to discover public health pests and vectors of disease in the State of Qatar”, which has been developed by the collaboration of the FEC, the Ministry of Public Health and the Weill Cornell Medical College in Qatar, in addition to the project related to supplying samples of insects from Qatar environment to the Natural Sciences Department at Qatar National Museum. In this project, 1700 scientifically embalmed, classified and documented insect samples were provided to the museum, representing different environmental regions within Qatar.