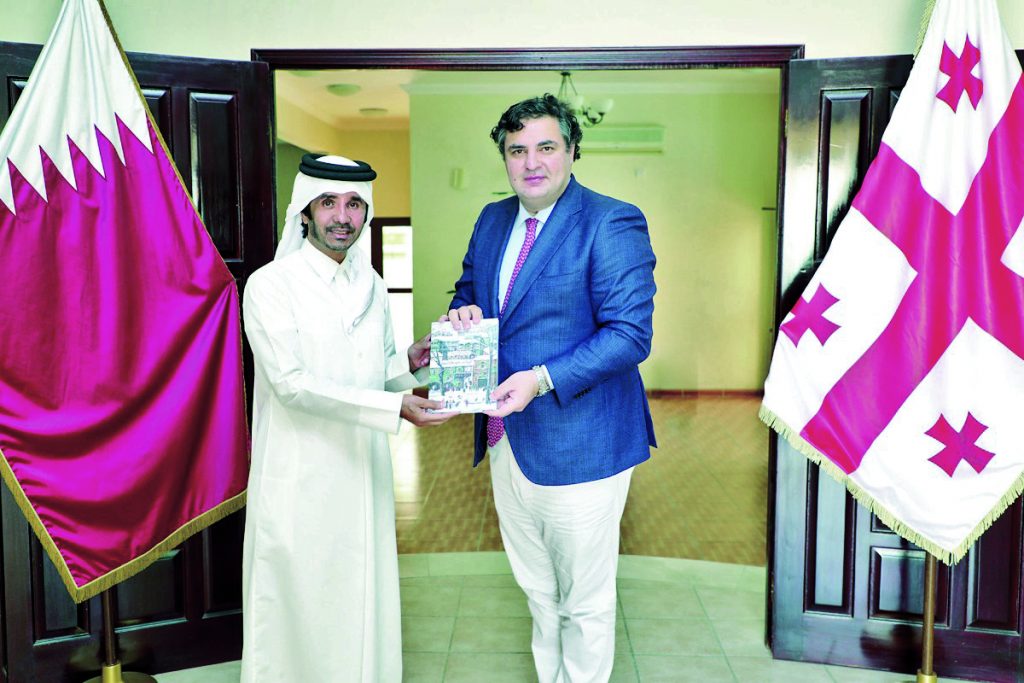 His Excellency Mr. Nikoloz Revazishvili, Ambassador of the Republic of Georgia to the State of Qatar, and Mr. Shabib Bin Arar Al Nuaimi, Director of Qatar Poetry Center honored the winner of “Nathra” competition in the Georgian language.

The Georgian Embassy in Doha invited the Director of the Center to discuss future prospects for cooperation in the field of poetry. The guest of the September edition of the monthly “Nathra” competition was the Georgian Embassy in Doha. Mr. Abdulaziz Bin Hazeem Al-Maliki, an expert on events and public relations at the Qatar Poetry Center (Diwan Al-Arab), said that “Nathra” poetry competition can be described as (monthly, local, Arab, international) and it is based on involving the embassies and their communities residing in Qatar, in addition to citizens in their countries to present their works of poetry in their mother tongue. The works participating in the competition are usually presented to a jury determined by each embassy. Mr. Al-Maliki added that the competition comes within the framework of the efforts of the Qatar Poetry Center “Diwan Al-Arab” to enrich the poetic scene in Qatar, and to work on sponsoring it within its digital platforms, in addition to opening up to the poetic scene in the countries of the world; all in line with the Center’s keenness to direct its competition “Nathra” to the international poetic scene.

This competition enjoys a remarkable interaction from the users of the digital platforms on which “Diwan Al- Arab” is available, where various participations have been received since the launch of the first edition of the competition. It is indeed added to a number of “Diwan Al-Arab” activities, through which the Center seeks to enrich the poetic scene in Qatar, support young talents, and work on sponsoring them within the various platforms of the Qatar Poetry Center, in addition to developing the creative talents of young people in a way similar to the “Poet of Universities” competition organized by Diwan Al Arab; which enjoys a remarkable participation by university students in the State of Qatar.

Eleven embassies in Doha have participated in the competition editions so far, including the Embassies of Japan, Britain, India, Pakistan, Turkey, South Korea, Georgia and Kyrgyzstan. The Center plans to continue organizing the competition, and aspires to include more embassies.