Back / العودة
You are here: You are here: » News » Communities Are Required to Protect Their Own Cultural Identities

Communities Are Required to Protect Their Own Cultural Identities 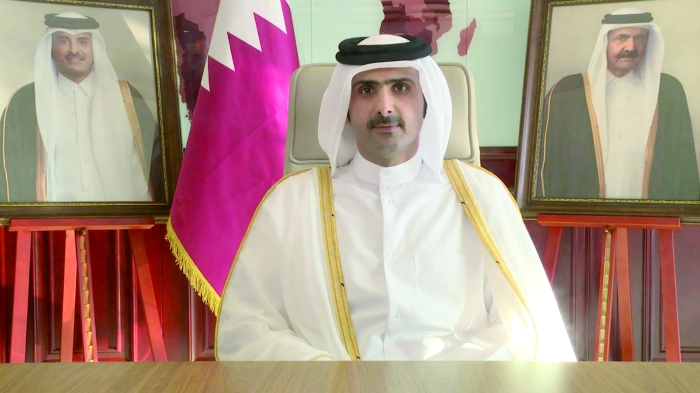 His Excellency Sheikh Abdul Rahman Bin Hamad Al-Thani, Minister of Culture, said that culture is a key driver for advancement and development in societies, a safety shield for the national security of any society, and it is an essential part of the building blocks of the bridge of dialog between nations. His Excellency, during his participation yesterday in the regional consultations for the Arab region, which were held via video conference, in the presence of a group of their excellencies ministers of culture, as part of the preparations for the Mondiacult Conference which will be held in Mexico next September, also added that “technical development and digital revolutions have shortened the distance between nations, at a time when the world has become a cosmic village. Movement between countries has become way easier than before, as it is the case with the transfer of cultures, information, and material and cultural goods. Today, people exchange knowledge easily and quickly compared to what was in the past, which contributed to bringing them together and increased their ability to exchange experiences and cultural aspects.” HE the Minister of Culture, furthermore, explained that “these many advantages provided by technical development posed new cultural challenges. In some aspects of this accelerated progress of digitization, some destructive ideas appeared that would threaten the identity of every society, and thus affect the creative diversity that enriches the cultures of nations. As much as societies seek to reap the fruits of digital progress, they are also required to protect the cultural features that make them proud of their values and adhere proudly to their cultures.”  His Excellency also stressed that it has become necessary to build cultural immunity at the service of humanity; for the sake of human coexistence in light of these digital revolutions. This does not mean surrender to everything resulted form globalization; where cultural diversity and respect to other cultures should prevail. It is, rather, protecting each nation and providing civilizational addition at the same time through the optimal use of the means of digital progress, and this will only be achieved by spreading awareness of these new challenges through cultural programs and initiatives. His Excellency Sheikh Abdul Rahman Bin Hamad concluded his speech by saying: “We are currently living at cultural crossroads, which calls upon us to exert all efforts in order to benefit from the creativity of human thought, confront and fight the unwelcome deviations in thought, and rid the digital revolution of the negative effects on our identity and society. Therefore, let us work together to achieve this honorable goal in which living consciences believe and seek, where nations adhere to their identity to contribute to building human civilization.”

During the consultations, national, regional and international cultural policy initiatives were discussed through several sessions that focused on specific central areas of the policies forming the cultural sector in the Arab region. Similarly, during the conference, to be held from 28 to 30 September, a number of main themes will be discussed, the most important of which is the COVID-19 pandemic, technological transformations, deep communications, climate change, and the need to address the challenges facing cultural and creative communities.

In a related context, Mr. Hamad Lahdan Al-Mohannadi, Advisor at the Office of the Minister of Culture, participated in the Arab Consultation Forum at the level of Ministers of Culture, and spoke about the issue of promoting the creative economy, noting that it is a term that was accompanied by a group of other terms, namely cultural industries, and investment in culture. It is noteworthy that the World Conference on Cultural Policies and Sustainable Development will be held in Mexico in conjunction with the 41st session of UNESCO General Conference  next September, after the unanimous approval of member states, and will be attended by representatives from ministries of culture, NGOs, civil society, artists and experts who will analyze the state of cultural policies to meet current global needs and challenges. The first session of the Conference was held in 1982 also in Mexico, while the second session was held during 1998 in the Swedish capital, Stockholm.