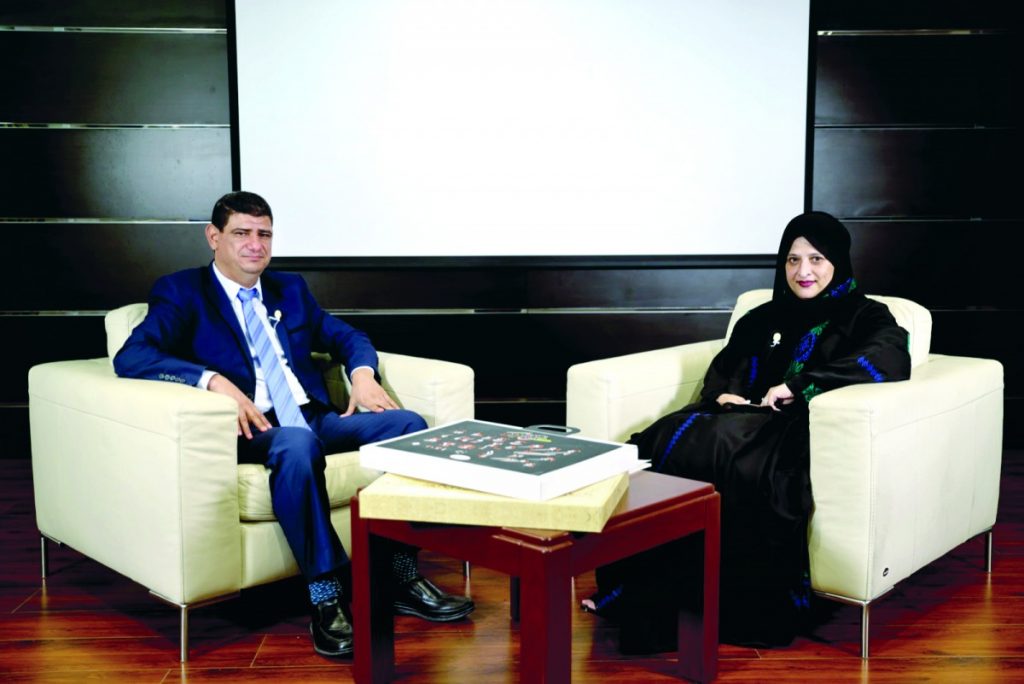 As part of the activities set to celebrate the International Day of the Arabic Language, the Qatari Authors Forum hosted Khuloud Rashid Saadoun Al-Kuwari to talk about her journey with Arabic calligraphy, during the “A Dialogue with” initiative, run by Dr. Ali Afifi Ali Ghazi. The episode was broadcast on the Forum’s YouTube channel.

Al-Kuwari talked about her beginnings with Arabic calligraphy since childhood; where she used to pay attention to the written details and the shaping movements of letters, which made Arabic calligraphy engraved in her mind and memory. She, also, indicated that she was encouraged by her teachers, imitated Arabic calligraphy and adopted the method of self-learning during her early educational stage; while at the university level her passion for the art of Arabic calligraphy increased. She worked harder to refine her talent, and participated in the Kufi Calligraphy and Decorative Arts Course that was organized by the Qatar Fine Arts Association.

Kholoud Al-Kwari, moreover, said that her continuous exposure to the works of the most important calligraphers in the Arab and Islamic worlds encourages her to learn and get acquainted with the rest of the types of calligraphy that she has not mastered yet, and that she prefers to write in all types but the Diwani remains the best, closest to her heart, and the most used by her as it is flexible, easy to write, and bears an aesthetic character and form that is attractive to the eye and composes distinguished and unique artistic works. She also explained that at the university stage she began to like the visual arts more and she introduced calligraphy in her art works, but when she began to practice her work in Qatari schools as a teacher she decided to spend more time on Arabic calligraphy. Calligrapher Khloud also explained that she is trying to learn all types of Arabic calligraphy, noting that each one has its own characteristics and uniqueness, and the more she learns a new type the easier it will be to explore other types because of the acquired basic skills that can be applied to the rest types. Kholoud Al-Kuwari, therefore, advises those who want to learn Arabic calligraphy, especially children, to start with the “Ruq’a” ; as it establishes an improvement of the handwriting in essence. It is, further, easy to learn and practice, encourages the beginner-learners to practice the art of Arabic calligraphy, and leads them to learn other types in the world of Arabic calligraphy.