Back / العودة
You are here: You are here: » News » BOOK LAUNCH: GLOSSARY OF TOPOGRAPHY, NAMES OF SITES, AND GEOGRAPHICAL LOCATIONS IN QATAR

BOOK LAUNCH: GLOSSARY OF TOPOGRAPHY, NAMES OF SITES, AND GEOGRAPHICAL LOCATIONS IN QATAR 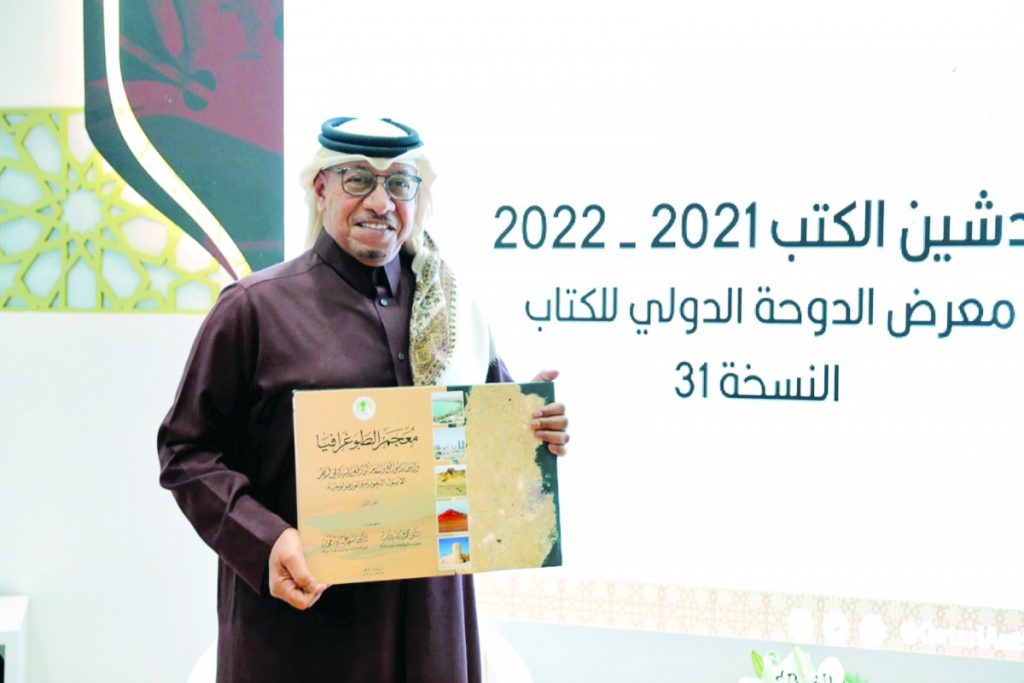 The Qatari Authors Forum at Doha International Book Fair witnessed the launch of Glossary of Topography, Names of Sites, and Geographical Locations in Qatar: Linguistic and Morphological Origins” by Dr Saif Al-Hajri and the late Dr Mohamed Ziab. During the book launch ceremony, Dr Al-Hajri said: “This book is almost unique in its kind, as it combines topography with mythology, geography, and linguistics.” It encompasses the memory of Qatar, its people, and beyond. The author points out that this work is the fruit of a long and in-depth research that spanned about seven years, during which the two researchers exploited everything their eyes fell on and were preoccupied with every word or letter of relevance to their work.

Al-Hajri explained that this encyclopedic study aims to provide an inventory of the names of places and Arabic words in the State of Qatar, display their geographical and astronomical locations, and determine their coordinates within lists for interpretation from linguistic and morphological perspectives to identify their roots and determine the etymological origin of the name, noting that understanding what these names and locations mean provides us with relevant information about the topography of the place or region in which these names occurred. The study succeeded in recording most of the 3,467 places and their pronunciation in the local idiolects.

Dr. Al-Hajri explained that the dictionary is concerned with heritage, the environment, relations, and memories. It leads readers, researchers, investigators, interested people, students, and specialists to reach the unhindered and precise, so as to link past and present through the roots and explore the memorable times of past generations. It defines locations that were inhabited and visible, meanwhile determining the number and nature of these sites, their origins, their characteristics and distribution, and the extent to which they relate to the environment and interact with it, as well as the extent to which they represent our language, the language of the Holy Qur’an.

He also stressed that they were keen in this study to monitor the names of places so that they correspond to the local idiolect, and not neglect the correct pronunciation of each name, and to explain the occurrence of vowels. For instance, in the word “jibal,” the diacritical mark “kasrah” appears under the letter “j”, which reflects the local idiolect, while the correct pronunciation is “jabal” with a “fatḥah” above the letter “j”, and the word “Qatar” is pronounced as “oh qitar” with the diacritical mark “kasrah” appearing under the letter “q”.

The book defines topography in its limited sense as a description of all the features of the place, whether it is permanent or semi-permanent. On the other hand, it is intended as the shape of the surface in general and the result of the factors of erosion and sedimentation on physiological phenomena. Dr. Al-Hajri added that place names in Qatar reflect, on the one hand, the dynamism of the Arabic language and its characteristics in the ability to elicit other words, grammatically and morphologically, in its ability to cover the intangible vocal differences, and, on the other hand, they reveal another aspect of the role of topography in the lifestyle and the underlying living patterns and their relationship, especially those related to water resources in dry areas with scarce seasonal rainwater.