Back / العودة
You are here: You are here: » News » ARABS CONGREGATE AT BAITU AL HIKMA (HOUSE OF WISDOM) OVER EASTERN “MAQĀMĀT” 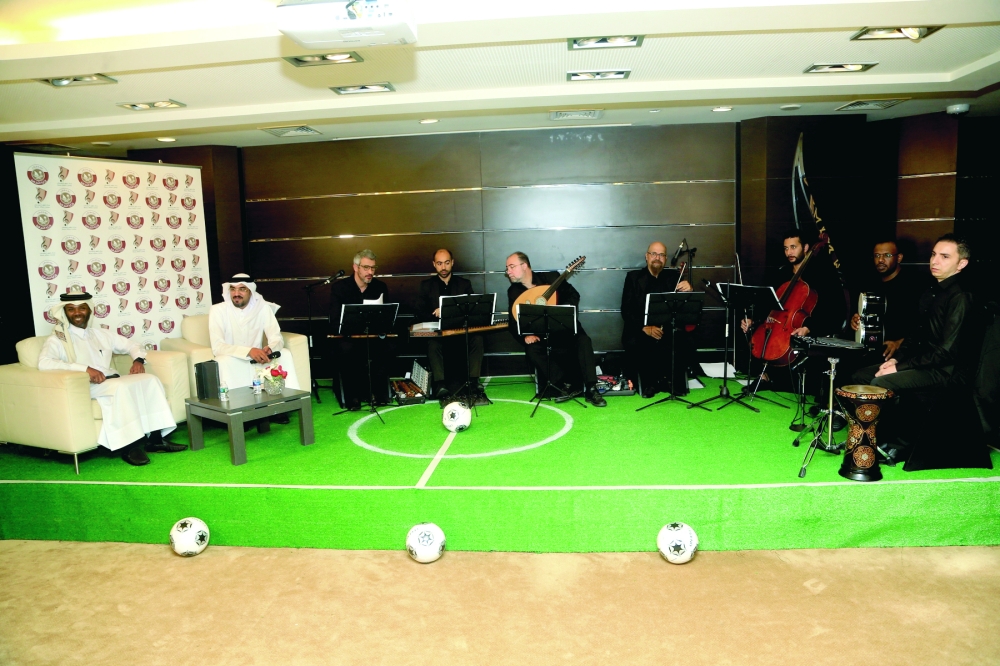 The House of Wisdom Hall at the Ministry of Culture hosted yesterday the second edition of the “Soccer Chants” organized by the Music Affairs Center in the framework of its activities in conjunction with the Arab Soccer Cup  2021, in which artists from Qatar and the Arab world participated, along with media professionals led by Mr. Mubarak Nasser Al-Awami, Assistant Director of Qatar Television, Dr. Ilham Badr, and broadcaster Kholoud Al-Humaidi, Head of Broadcasters Department at Qatar Radio. The show was hosted by journalist and poet Adel Abdullah.

The Egyptian singer residing in Qatar, Ahmed El-Anani, sang some of the masterpieces of Abdel Halim Hafez, such as the section of “Qāri’atu Alfinjān,” and another one from the masterpiece of Kawkab al-Sharq Umm Kulthum, “Sīrat al Ḥub” and the patriotic song “Yā Ḥabībatī yā Maṣr.”

The Syrian singer, Mohamed Barakat, entertained the audience with a bouquet of Qudūd Ḥalabīya (Aleppine Musical Measures), including “Zeinu al Marja,” “Qadak al Mayās” and “Ya Māl Shām,” which evoked in the audience reminiscences of the late singer Sabah Fakhri.

Mr. Mubarak Al-Awami said: “I was surprised this evening by these fresh voices that delighted the audience and by the wonderful performance of the orchestra. I trust the Ministry of Culture’s choice of artists and this musical show as part of their activities on the sidelines of the Arab Soccer Cup 2021.” He pointed out that the Ministry of Culture and those in charge at the Music Affairs Center translated into reality what is currently happening at the House of Wisdom Hall in Qatar, where Arab singers met on the same stage to sing in the same language. It was such a beautiful evening.”

Commenting on the cooperation between Qatar TV and the Music Affairs Center in the coming days, Al-Awami said: “Qatar TV is open to all and it adopts these projects. We have established partnerships with almost all entities in the State of Qatar. We are working to expand these partnerships, and the Ministry of Culture is a true partner for Qatar TV, and there will be further cooperation in the future.”

On the program plan drawn by Qatar TV for the National Day, he said: “The National Day this year is exceptional and differs from the national days in the previous years, as it coincides with a great Arab soccer championship under a great media momentum. We were all surprised by the size of the championship and the media momentum. Therefore, the National Day this year is a fusion of our feelings as citizens on this day and our feelings about hosting the Arab teams in this Arab championship. This fusion will appear on Qatar TV, as the National Day coincides with the final match, and there will be coverage of the tournament and the accompanying events, in addition to coverage of Qatar National Day, which is an important event for us.”

In turn, the journalist Adel Abdullah said: “The artistic voices gathering today in Doha, the land of Arabs, through residents of Qatar, underscored such a special event. This is the second round of the event, and the third one will be held in Katara next Thursday. This Arab gathering is evidence of the love and peace that unite Arab countries.”