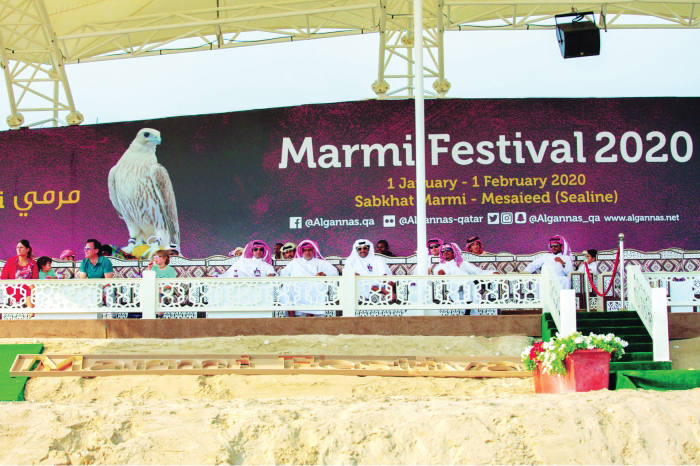 Activities of the 11th International Marmi Festival for Falconry and Hunting started yesterday, under the patronage of His Excellency Sheikh Joaan bin Hamad Al Thani. They will continue until the 1st of February at Sabkhat Marmi at the Sealine area. Marmi Festival is considered one of the most significant benchmarks of the culture of Qatari people, as it represents Qatari heritage which is rich in its elements and it shows how forefathers used to live in the wilderness. Yesterday, Falconers started to flock to the festival venue, before dawn. They were all active and eager to win as it means so much to them.

Al Talaa competition opened the 11th edition of the Marmi Festival with groups 1-4, where only one falconer qualified for the finals, Mr. Muhammad Ahmad Al-Fuhaid. His falcon flew in 03:50:06.

For the first time, Al Talaa will be held in the morning on rocky elevation (Hazm), not on sand elevation (Taas). It also developed greatly since its start. In its early years, electronic houbara were used on flat land, however, due to a large increase in the number of Houbara, live Houbara were used instead, a decision welcomed by the falconers.

Mr. Muhammad Mubarak Al-Ali said that four groups participated in the first day and that competitions were delayed a little until fogs cleared, so that vision would be perfect and chances are equal to everyone. He pointed that the contest is held on rocky elevation (Hazm), as clarified earlier.

Falconers participating in Al Talaa competition, in turn, thanked Qatar Al Gannas Society and the Festival organizing Committee for their endeavors at always meeting the falconers’ demands and serving falconries and falconry heritage.

Falconer, Muhammad Rashid Al Buainain, from the Arkia team said: “this is our first time to participate, we ask Allah for success.”

Immediately after Noon prayer, the audience, who was intensively present since the first day of the festival, got to witness Haddad Al Tahadi Championship, it is the champion that brings excitement and challenge into the festival and it is airing live on Al Kaas 2 channel, like all other competitions.

Mr. Ali Sultan Nasser Al-Hamidi, Chairman of Haddad Al Tahadi Championship Committee, explained that the preparations for the championship are in full swing, noting that ten years have passed since first edition of the festival, and we are heading towards the second decade.

Mr. Al-Humaidi explained that the weather is suitable for Haddad Al Tahadi Championship, whether in terms of wind speed or moderate air, which would be in the best interest of the Shaheen falcons as well as the pigeons, and he wished success to all participants.

Mr. Al-Hamidi also praised the great cooperation of the participants with the organizing committee, which makes the championship happen in a smooth and comfortable atmosphere. He also pointed that the distance for falcons and pigeons to fly would be less than 100 meters.

Mr. Abdullah Ahmad Fakhro, owner of the carrier pigeons, who became an icon of the festival, has confirmed the readiness of his pigeon for the challenge. He hoped that his pigeons would return safely to their homes in Umm Abiriya, and that they would win over the falcons. His wish came true since day one, as he was the most prominent winner.

As for the strength of the pigeons competing in the contest since the first day, Fakhro said there are strong pigeons, and there are less powerful types. He added that a number of his pigeons have participated in previous festivals, also in the coming days he will compete using pigeons of the years 2018 and 2019.

Fakhro explained that he always works to train pigeons in order to elevate their fitness level. Pigeons always fly around their cages to gain power every day. They fly for 3-5 km, which enables them to escape from chases. He said that he takes his pigeons to areas like “Al Adaid” and “Salwa” and other farther places for training. He added that he does not let falcons chase his pigeons as he is not a “bird shepherd”, however he wants young people to fly their falcons to chase the pigeons, but they refuse and say they only do it at the competition.

He added that the 11th edition of the Marmi Festival for Falconry and Hunting is special among falconers for the enormous support, great championships and prizes it has, which pushes everyone to compete in comfortable atmosphere.

Mr. Hamad Al Jamila, poet and announcer of Haddad Al Tahadi Championship, said: “this year we witness the 11th edition of the festival. All installations are full. Competitions are varied. Numbers are doubled. Participants are ready. It is going to be a different festival this year.

Haddad Al Tahadi Championship would be held at the beginning of the Marmi Festival. It is an exciting chasing match between shaheen falcon chicks and carrier pigeons. The first day of the festival witnessed tough competition and continuous chases between the carrier pigeons belonging to Mr. Abdullah Ahmad Fakhro and shaheen falcon chicks owned by participants of the first group amounting to 35 falconers. Mr. Fakhro’s pigeons won in the end, as they exhausted the falcons in continuous chases without getting to the pigeons. The first group contest ends with Mr. Fakhro’s pigeons stunning wining.

On his part, participant, Mohamed Abdulaziz Al Khatir said that Allah grants him success. He noted added that he and his friends have trained their birds adequately, whether in Sealine or the North area and they used different styles of training, such as planes, phantoms or pigeons, so that their falcons would be ready for competition.