Back / العودة
You are here: You are here: » News » Al-Khater Discusses his Book “The Cognitive System of Qatari Society”

Al-Khater Discusses his Book “The Cognitive System of Qatari Society” 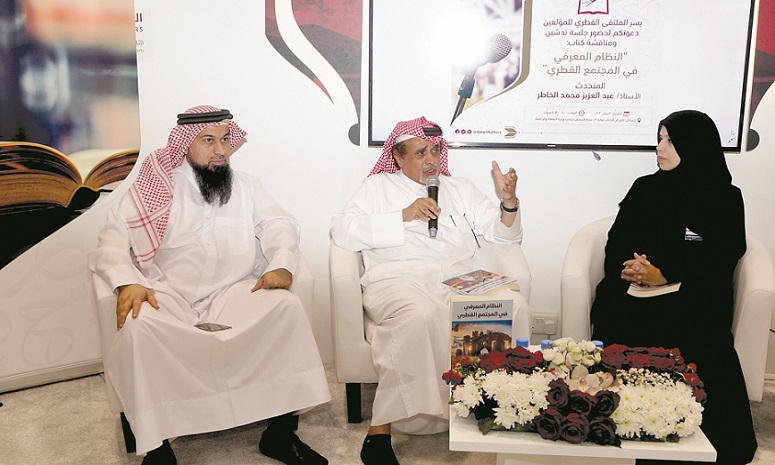 The Qatari Authors Forum pavilion at the 30th Doha International Book Fair (DIBF) hosted the launch and discussion session of the new book by Mr. Abdul-Aziz Bin Muhamed Al-Khater. The book is titled “The Cognitive System of Qatari Society”. The book is one of three published by Dar Al Sharq recently. It is sold in various local and Arab bookstores and is currently offered in the booth of Dar al Sharq at the DBIF.

The book brings together treasures of ideas, concepts and interpretations which provide answers to many questions related to cognitive, human and social concerns. It is composed of four chapters, each with an independent title. The first chapter addresses the cognitive system of the Qatari society while the second features some articles by the Author published in Al Sharq Newspaper. In the third chapter the author discusses the Memory of Place and how close a link an individual has to this Memory, whereas the fourth chapter is titled “Diaries”, and it is composed of social articles through which the author answers numerous questions.

During the launch of his book “The Cognitive System of Qatari Society”, the author Mr. Abdul-Aziz Bin Muhammed Al-Khater reflected on the cognitive system of the Qatari society, whose beginning was marked by two historic moments this society has witnessed. Prior to this; it was more of a gathering than a society as the society must be self-conscious as a society and not as smaller sub-entities; such as individuals, tribes or sects. The author pointed out that in order to understand any society; it is necessary to notice and explore the prevailing cognitive system and the way it was formed from time to time as well as how close it is linked to the prevailing consciousness.

Furthermore, Al-Khater indicated that the cognitive systems prevailing in our Arab societies are oppressive systems not humane systems. In other words, these systems do not respond to the human needs of their peoples unless under duress. He attributed this phenomenon to the internal division and dissent within the Arab cognitive system between its two components; the inherent ideological component; i.e. religion and social customs and traditions and the component generated by seizing the opportunity and benefiting from coincidences, whether geographic “wealth”, or historical “tribe or compound”.

In an exclusive interview with “Al-Sharq”, the author Mr. Abdul Aziz Bin Muhammed Al-Khater has stated that publishing the collection of his articles in his book “The Cognitive System of Qatari Society” was an initiative by “Dar Al Sharq”, to which he is one of the writers. He noted the fact that opinion writers are very few in Qatar and significantly declining. “I’m an opinion columnist,” He stated, “And the number of opinion columnists in Qatar is very low and decreasing unfortunately. Had it not been for my determination, I would have stopped writing. Nevertheless, the leadership represented in His Highness Sheikh Tamim bin Hamad Al Thani, the beloved Emir of the country, is interested in listening to views, even if it doesn’t necessarily adopt these views. That’s what keeps me going and innovating”. He further emphasized that the intellectual articles written by him and by others remain relevant for a long time. Some articles, he added, he had written ten years ago, and they still have presence and influence in the society; some of them, not all, need to be archived.

With respect to the cultural landscape in the state, the author Mr. Abdul-Aziz Bin Muhamed Al-Khater said that there is a movement witnessed by the cultural landscape, however, it is state-driven rather than society-driven, and this is not enough as the society needs to push its own social mobility and the state needs to take the position of the supervisor on this mobility. He commended the emergence of a large number of local writers, especially female writers, adding that the present generation is ingenious and it has extensive knowledge and an expeditious understanding of everything happening around it.

About his opinion on the DIBF this year, he said that the Fair is becoming more similar to Darb Al Saai Festival in terms of the wide-open spaces and grand cafes, while the book stores had receded in the corners and crannies. He urged for the return into the order of the past fair, which he thought was way better, as book fairs must be devoted to books rather than entertainment, pointing out that the tradition of “Book signatures” in book fairs is nothing more than a propaganda and it does not amount to the level of culture.

He further emphasized that “book fairs” is a positive phenomenon provided that books should take the lead and remain the primary focus, and symposiums, lectures and other accompanying events shall take the second place. He emphasized the need for symposiums to be unguided and non-selective, so that it leaves the choice to the audience.

At the conclusion of his interview with “Al Sharq”, Mr. Abdul-Aziz Bin Muhamed Al-Khater expressed his appreciation and gratitude for Dar Al Sharq and its managers, and in particular the Editor in-Chief Mr. Sadeq bin Mohammad Alemeiri for his concern for Qatar writers, and his emphasis on the importance of his continued support to the advancement of the local, Gulf, and Arab culture. He concluded by wishing further development, prosperity and success for the press in Qatar.

In his book titled “The Cognitive System of Qatari Society”, the author Mr. Abdul-Aziz Bin Muhamed Al-Khater explains that three patterns of cognitive system have dominated the Qatari society. First, from the early 1960s to the early 1970s and it was compatible with nature; i.e. the dominant feature of the social order. Second, from the 1970s to the mid-1990s when posturing and balance were the key features of the prevailing cognitive system, i.e. saving critical posts to educated Qataris and the emergence of a middle class of state officials. Third, from the 1990s onwards, an ambitious cognitive discourse has emerged believing in its role not only on the national or regional level but also on the international level pushing towards a new conscious, which has led to some destabilization in the relationship between individuals and their geographic and historical environment which had been the axis of balance and consensus.

Mr. Abdul-Aziz Bin Muhamed Al-Khater holds a Bachelor Degree in Sociology, Master’s Degree in Administration. He is an opinion columnist at Al Sharq Newspaper. His published articles featured in the book “The Cognitive System of Qatari Society” are part of a series of articles published in the period from September 2018 to October 2019.