Back / العودة
You are here: You are here: » News » Al-Jasrah Celebrates Places, an Art Gallery by Yusuf Ahmed 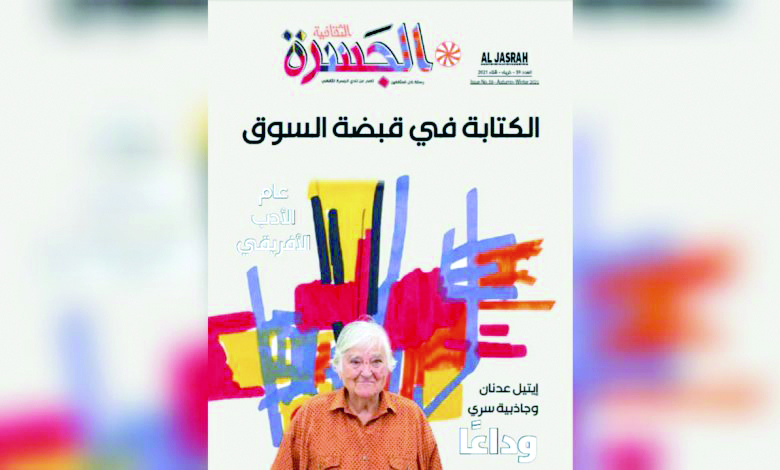 Al-Jasrah Social and Cultural Club released the 59th issue of its magazine Al-Jasrah Al-Thaqafiyya. The issue comes in a new format and a new focus as explained by Mr. Ibrahim Al-Jeeda, chairman of the club’s board of directors. In his editorial column he writes, “With this issue, we say goodbye to 2021. We wanted to end the year with a transformation of the magazine in terms of content and format in ways that reinvigorate the magazine. The magazine is like a beam of light that extends infinitely and never knows inertia, and with it, Al-Jasrah illuminates our world.

The new issue comes with new designs for layout, cover, and colors. The content has also changed to be denser on cultural content, which can be seen in the feature article Writing in the Grip of the Market, which addresses current realities of reading and publishing in the Arab World.

Visual arts had a spotlight in the issue in a review of Places, an art gallery displaying Yusuf Ahmed’s paintings which depict historical scenes of old Doha. The paintings bring to life the history of the Mushayrib neighborhood with its old stores and main streets. Another spotlight on visual arts is Ahmed Ezz Al-Arab’s profile of Gazbia Sirry’s paintings and life. Other articles introduce African writers who recently received international awards, such as Abdulrazak Gurnah, who won the Nobel Prize in literature, and Mohamed Mbougar Sarr, who won the French Prix Goncourt Award.

The issue includes interviews with Moroccan author and critic Mohammed Mutassim who addresses the topic of cultural studies and how they are received in the Arab World. It also includes a conversation from the archives between Lebanese-American poet Etel Adnan and Tunisian poet Khaled Al-Najjar, who first met in Tunisia in 1978.

The cities of Mosul and Jerusalem are featured in this issue of Al-Jasrah magazine with special focus on their Islamic landmarks. Critic Dr. Sabri Hafiz continues to narrate his memories with Tawfik Al-Hakim, the pioneer of Arab theater. In his second installment of memories, he not only talks about Al-Hakim, but also about the cultural scene at Al-Hakim’s office at Al-Ahram newspaper during the sixties and seventies.

Cinema has its share in the new issue of the magazine, as it includes an article entitled “Film Festivals: Sociological Phenomenon and Historical Documentation.” The article sheds light on the beginnings of film festivals and how they relate to historicizing film as a social phenomenon.