Back / العودة
You are here: You are here: » News » 3 falconers qualified for the “Al-Talaa Falcons” category finals in the “11th International Marmi Festival for Falconry and Hunting” 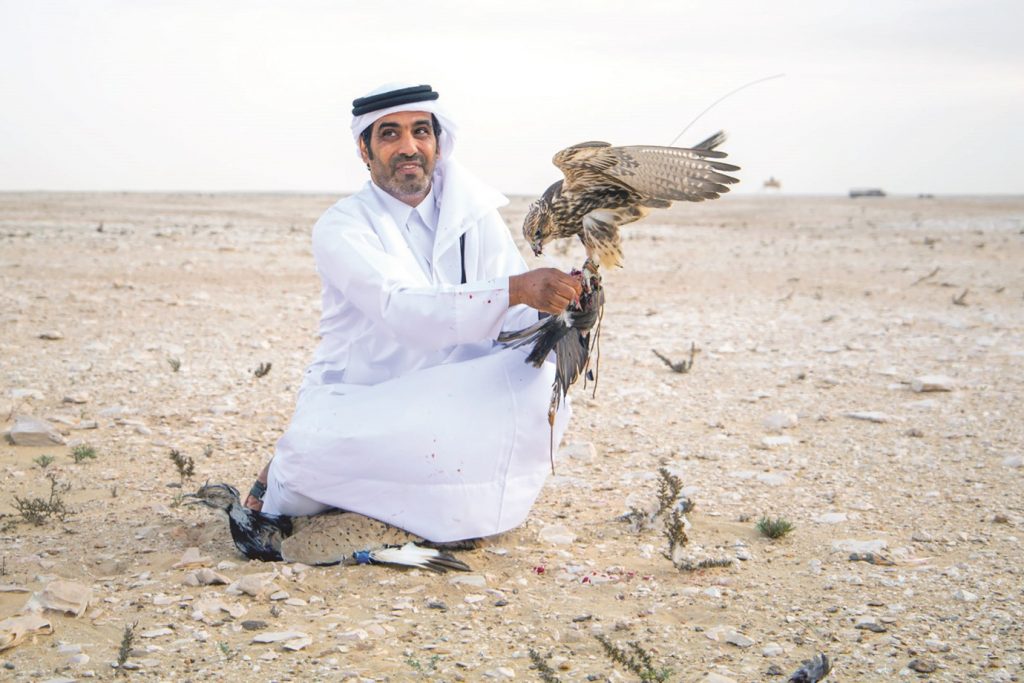 The competitions of the eleventh International Festival for Falconry and Hunting will be held today (Monday), at Sabkhahat Al-Marmi in sealine, which will be held under the patronage of His Excellency Sheikh Joaan bin Hamad Al Thani, and will continue until the first of next February, by conducting the “Al Talaa Falcons” Category Championship for groups from 24 to 28 in the morning and “Hadad Al-Tahadi” Championship for the fifth group.

The winners expressed their happiness at winning and their birds hunting of the Houbara, thanking the organizing committee of the 11th International Festival of Falconry and hunting and wishing everyone success.

They explained that the atmosphere yesterday was appropriate to hold the competitions, praising at the same time the decision of (Al-Talaa) committee that was taken on Saturday, January 4, which requires postponing the competitions of a number of groups due to sudden weather changes, which makes it difficult to conduct the competition and the visibility of their birds due to the heavy air laden with dust And dust.

For his part, Mr. Ali Saeed bin Noura, a member of (Al-Talaa) committee, said: “The atmosphere is suitable for conducting the (Al-Talaa) championship and the rest of the competitions, except for the morning of last Saturday, on which blew winds laden with dust. The committee decided that the competition be stopped for the remaining groups and postponed to another day to be determined later. Falconers would be informed of the alternative time to conduct the competitions at a sufficient time before that, in order to prepare well. He further pointed out that this decision was taken for the sake of the contestants and for the level of the championship to be high from the beginning to the last groups, then the finalists.

Mr. Ali Saeed Bin Noura made it clear that the championship path is special this year, and the atmosphere is attractive for falconers and the audience of the Marmi festival, and the weather heralds good rain, which is what the falconers like because it is in the interest of their birds because the vision becomes more clear, and the Houbara are clear as well.

Regarding the change of the championship venue from (Al-Taas / Sandy Ridge) to (Al-Hazm / Rocky elevation), the (Al-Talaa) committee member highlighted that the difference was clear from the first day, and was in the interest of the contestants and their birds, as the threat is good, because the terrain and the Houbara course were more favourable for the falcons. Furthermore, the number of participants in the (Talaa) championship has increased remarkably, in addition to the audience that started to accept the championship significantly, even though it is held early in the day, where we see large numbers attending to support the participants, whether from their families or from their friends.

Bin Noura emphasized that the Marmi festival is overshadowed by special feelings, as it is an occasion for visiting and linking between the participants who have made friends over the past editions of the festival, pointing out that there may be people who may meet only during the festival days.

He praised the support received by the sport and hobby of hunting and falconry by the state officials and a number of bodies, in order to raise the level of the falconers and support attention to this authentic Qatari heritage that we have inherited from our parents and grandparents.

Visitors also receive first-hand experience of this legacy and falconry, which is considered to be an art that teaches patience and endurance, wishing a good season for all.

During the evening period, it was time for falcons and carrier pigeons, for a dramatic parade the “Hadad Al-Tahadi” competition. The audience, which was directly following the exciting chases between chicks of Al-Shaheen Falcons and carrier pigeons, or via giant screens installed near the platform when the birds disappeared from view. This was accompanied by an enthusiastic comment by Mr. Mubarak Thamer Al-Subaie, whose commentary and suspense of the spectators was similar to that of broadcasters’ comment on other sports interviews such as football when their voice rise as a player approaches the opponent’s goal, the voice of Al-Sabaie rises the closer the falcon approaches the pigeon.

Contestant No. 7 was the most exciting of the event as his bird (Khobar) chases the carrier pigeon )Fakhro) for a long distance, approaching sometimes and turning away other times, trying to rise higher than the pigeon, but the final word was for the pigeon’s wing.

Once the Shaheen Falcon outspreads its wings, this is a sign of its surrender and it returns to its owner, who waves to it either by the pigeon or by using the “Telwah” (type of bait made of feathers to attract the Falcon back to its owner) to return to its home, and with it the voice of the commentator fades with his famous phrase (better luck next time!).

Furthermore, the festival site is known for a variety of shops that provide many services related to falconry, falconers, desert safaris and wildlife.

In this regard, Mr. Hassan Obaidullah, owner of “Al-Jala’a for Trading Birds and their Supplies” company said: “The shop offers everything related to falcons: )falconry gloves) and (coal containers), (cloth bags), (falconry ropes), etc.”

Hassan Obaidullah said that the “Dosos” (falconry gloves) are made and tailored at the request of the customer, pointing out that a number of types of leather are used, such as deer and cow hides, noting that the majority of customers prefer deer skins for such gloves, given their quality and value, because the bird has its value and special status for its owner. motifs and colours as well are used according to the request of the customer.

Hassan Obaidullah praised the International Marmi Festival for Falcons and Falconry in its current edition, noting that the public like to attend it because of its value in preserving the Qatari folk heritage, as the people of Qatar are falconers, and they love birds. Also, the atmosphere and moderate weather conditions tempt everyone to escape from the hustle and bustle of the city and resort to the calmness, tranquillity and fresh air of the desert.